YouTube has announced a new set of restrictions on its prominent Masthead Ads, in order to reduce exposure to, and association with, certain types of content within the app.

As reported by Axios, YouTube will stop accepting Masthead Ads from a range of verticals, including alcohol, gambling, prescription drugs, and election and political ads.

“Beginning Monday, ads that feature any gambling-related content offline or online, including sports betting and casino games, will be banned. The ban will also apply to ads that promote the sale of alcohol, as well as branding ads for alcoholic beverages that don’t explicitly reference sales, while ads that endorse a candidate for office will also be banned. Ads that are political in nature, like issue ads, will be reviewed on a case-by-case basis.”

That will reduce the reach of these campaigns via this specific ad unit, which, given the nature of Masthead promotions, could have an impact in various ways.

As it sounds, Masthead Ad units take up the top of the screen in the YouTube app, providing significant exposure for brands through premium placement.

That’s made the ad units a more highly sought-after option – but YouTube has also found that its prominence has made it a key focus point for those looking to make a statement ahead of an upcoming vote or election. Which, given the exposure potential, could lend it to misuse.

The ads first came into question last year, when then US President Donald Trump purchased the masthead slot for the whole two days preceding Election Day, along with Election Day itself. 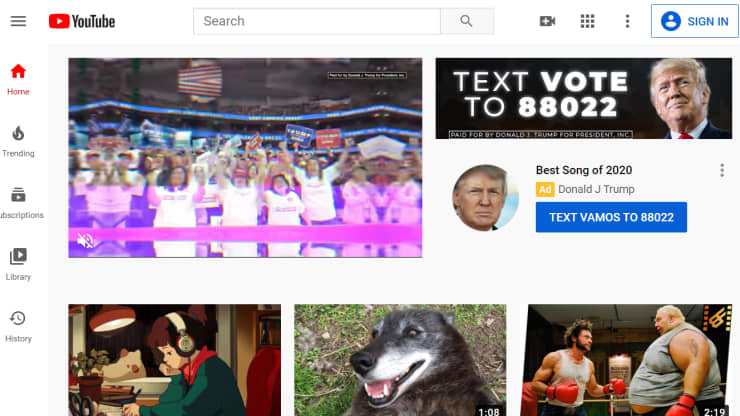 As you can see, that afforded the Trump campaign with a significant exposure advantage in the app, while also, potentially, aligning YouTube itself with the campaign, from an optics standpoint. As a result, YouTube discontinued full-day reservations for Masthead Ads specifically, providing broader access to the option, as opposed to a single dominant player. YouTube also stopped running political ads in the US for a period last year, in order to avoid potentially promoting unrest amid questions around the result.

This new change further highlights the potential risks YouTube sees in providing such broad exposure to its 2 billion users, and while the change won’t impact the majority of YouTube advertisers (Masthead Ads cost around $2 million per day, according to the New York Times), it is a significant update in YouTube’s process, underlining the rising concern around social influence via its app.