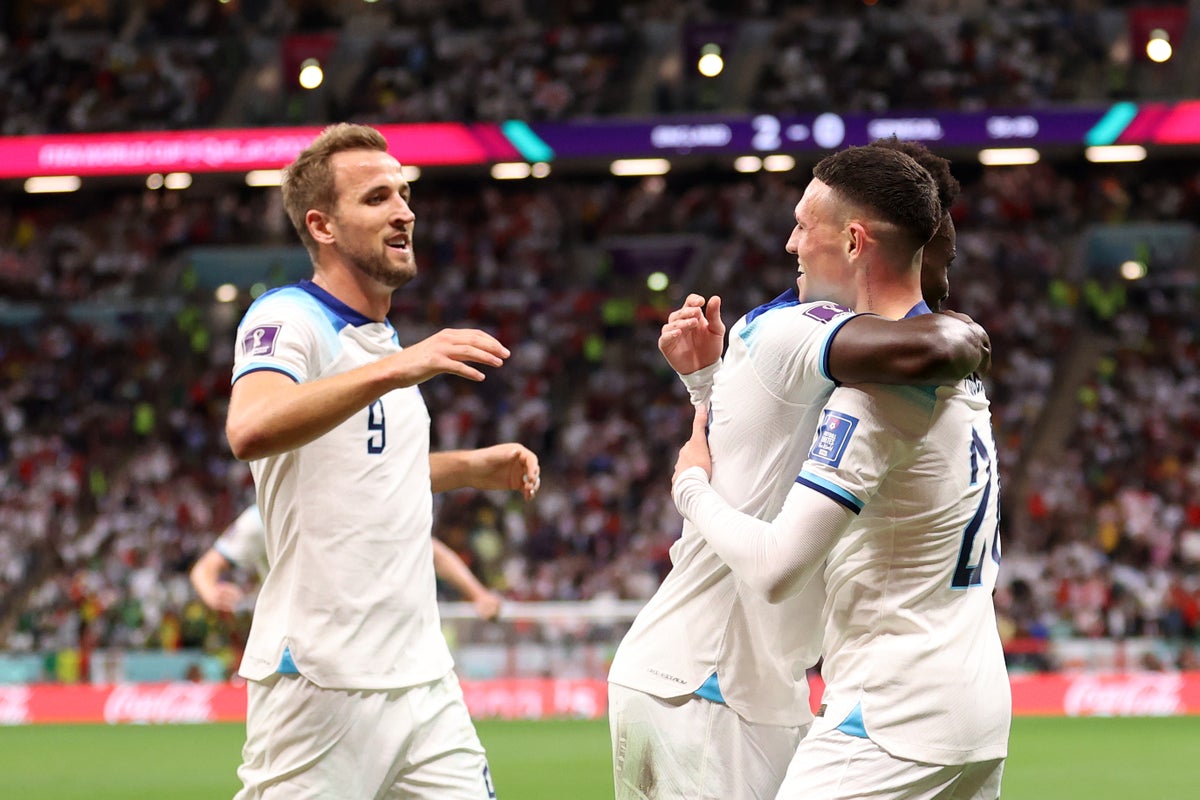 England swept Senegal aside in the Qatar World Cup last 16 to set up a quarter-final against France next Saturday.

It was not all good news for England though, as Raheem Sterling opted to head home for a family matterleaving his future involvement in Qatar in doubt. Follow all the reaction from England vs Senegal and build-up :

A willing tool of the Fifa machine in recent years, it is tempting to write off many of the things Arsene Wenger now says. Fresh from suggesting that the teams who made political statements at this World Cup were cosmically punished by exiting it, that temptation only grew. But his eye for the game itself, the one that so expertly guided Arsenal for so many years, remains as shrewd as it ever was.

“I personally think the team with the best wide players will win this tournament,” he had said at a Fifa technical briefing earlier on Sunday. A matter of hours later, England used their world-class width to devastating effect to down Senegal and book their place in the quarter-finals.

Everything wrong with the Qatar World Cup

ut of the many facts and figures circulated about Qatar’s problems, there is one realisation that should stand above everything. It is a disgrace that, in 2022, a country can host a World Cup where it has lured millions of people from the poorest countries on earth – often under false pretences – and then forced them into what many call “modern slavery”.

And yet this has just been accepted. The World Cup carries on, an end product of a structure that is at once Orwellian and Kafkaesque. A huge underclass of people work in an autocratic surveillance state, amid an interconnected network of issues that make it almost impossible to escape. “It’s all so embedded,” says Michael Page of Human Rights Watch.

The temptation is to advise Olivier Giroud to enjoy his record. The killjoys and the realists alike could argue he is unlikely to have it for long. Even as he overhauled Thierry Henry to become the most prolific man in the history of the French national teama threat to his status is accelerating towards him at devastating speed.

The score stands at Giroud 52, Kylian Mbappe 33. The gap could close rapidly. Mbappe does everything quickly and he has chased down more garlanded figures than Giroud. His first goal against Poland took him level with Cristiano Ronaldo on eight in World Cups, his second alongside Lionel Messi on nine. Each is almost certainly in his last World Cup. Mbappe could have three more.

He has emerged as the likely challenger to Miroslav Klose, the 16-goal leading marksman in the competition’s history. Yet Mbappe does not just play the numbers game; not when his defining quality is the pace that makes him viscerally exciting to watch. He is like Henry in overdrive, and not merely because of a fondness for the inside-left channel and a capacity to curl shots into the far corner.

The future is now: Jude Bellingham is making the World Cup look easy

There was a moment during the build-up to England’s second goal that you stopped and realised a 19-year-old from Stourbridge was already becoming one of the most feared midfielders in world football. Jude Bellingham had already beaten Pathé Ciss to a bouncing ball on the edge of his own box, turning a 50-50 challenge into a landslide victory, winning the ball with a downward header that cared not for the boot that might meet it. There was then the way he shrugged off Youssouf Sabaly, who engaged but then suddenly recoiled as if he had suffered a mild electric shock.

The moment in question, though, the moment that truly illustrated Bellingham’s command of this contest as the first half drew to a close, came immediately after that, when both Nampalys Mendy and Abdou Diallo were sucked into his orbit. Two-thirds of Senegal’s defence turned to face the brute force heading their way, paying no heed to either Phil Foden or Harry Kane’s runs in behind. Bellingham demanded their attention and by grabbing it, he as good as put England two up.

By that point, he had already set up the first. That was not all Bellingham like the second – there was Foden’s flicked backheel by the far touchline, then Kane’s threaded pass through the lines – but the intelligence of Bellingham’s movement and the authority of run into the inside-left channel was what really put Senegal’s defence on the back foot. A nonchalant square pass for Jordan Henderson appeared far simpler to play than it actually was, but that should be no surprise: in almost every game, Bellingham is making playing at your first World Cup look easy.

By that point, he had already set up the first. That was not all Bellingham like the second – there was Foden’s flicked backheel by the far touchline, then Kane’s threaded pass through the lines – but the intelligence of Bellingham’s movement and the authority of run into the inside-left channel was what really put Senegal’s defence on the back foot. A nonchalant square pass for Jordan Henderson appeared far simpler to play than it actually was, but that should be no surprise: in almost every game, Bellingham is making playing at your first World Cup look easy.

Raheem Sterling has left England’s World Cup camp after armed robbers broke into his London home on Saturday night while his family were there.

Sterling’s partner and children were at home when the armed intruders broke in and the Chelsea forward was left shaken by the incident.

Sterling wanted to return home after being informed of the break-in and Southgate said the player will be granted as much time and “space” as he needs, with the 27-year-old understandably concerned for the well-being of his children.

Harry Kane under no illusions of challenge England face against France

Next up is the quarter-finals and a meeting with the defending champions.

After cruising through the last-16, Kane is under no illusions as to the challenge his side will face on Saturday.

“It was a solid performance, we took our chances,” he said of the 3-0 win. “France are a great team, they’re reigning world champions. It’s going to be really tough evening.”

England make a straight line for the quarter-finals. And then another. And another. That is perhaps the best way to describe this coruscating 3-0 win over Senegaldriven by Jude Bellingham and Phil Fodenas Gareth Southgate’s side reached a third successive quarter-final in major tournaments.

It is only the third time England have managed that in history, which points to how the manager has made a virtue of navigating knock-out rounds. Harry Kane meanwhile seems to rise to them, given this was the second successive tournament where he got his first goal after the group stage.

Such a quality really shouldn’t be dismissed given the difficulty other heavyweight teams have had, not to mention previous England sides. Some of their predecessors might well have panicked under the pressure Senegal created in the opening half-hour, but it brought the opposite response out of Southgate’s players – especially Bellingham.