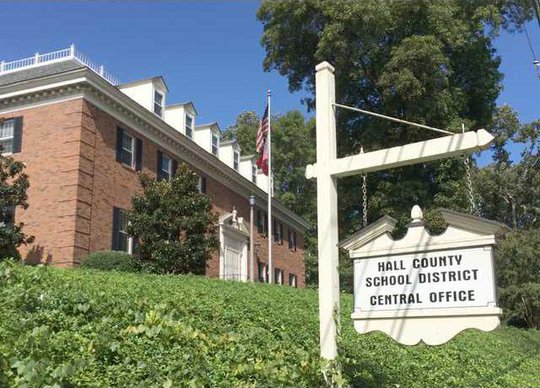 School board members said the property would be the site of a 342-unit apartment complex located at 2866 Lanier Tech Drive, right next to Lanier Technical College. They say they oppose the development because it would cost the school system more to educate the students who would live in those apartments than the school system would receive in added property tax revenue.

“Residential housing does not pay for the cost of education,” said Hall County Superintendent Will Schofield.

Richard Higgins, chairman of the Hall County Board of Commission, said it’s his understanding that the apartments would mainly house young working professionals and would not add many students to the Hall County school system. Commissioners have signaled their support and are expected to approve the de-annexation Thursday.

“There’s just no questioning that,” he said of the development adding more students to the school system.

Higgins, a former member of the Hall County school board himself, said he spoke with school board members, but said despite a great relationship they just couldn’t see eye to eye on this issue.

Mayor Sam Couvillon echoed Higgins, saying the people who rent the units would likely be young professionals. But the city doesn’t want the apartments for the same reason the county doesn’t want them, he said: The cost of educating more students would outweigh the extra property tax revenue.

Now the developer is asking the Hall County commissioners to annex the property in the hopes that it will grant approval for the project, he said.

The county school board has strongly opposed city annexation of county property, adopting a resolution of opposition in December. The reason, members say, is that it takes away revenue from the school district, because the residents who live on the annexed property would then pay property taxes to the city.

Officials also oppose annexations because they can change a student’s school district overnight. If the city annexes county property, a student who lives in that area may then be required to attend the city school system.

But de-annexation is new, officials said, something they hadn’t encountered before. The issue caught them by surprise, they said.

“It’s one thing to annex valuable property and for county school districts to lose that overnight,” Schofield said. “It’s a brand new chapter de-annexing costly property and putting it back into a county district.”