The US labour market added just 266,000 jobs last month and the unemployment rate edged up to 6.1 per cent, marking an unexpected deceleration in job creation in the world’s largest economy.

The April data compared with 770,000 jobs added in March — a downward revision compared to the previous estimate — and showed the US labour market was still well short of pre-pandemic levels. In April, 8.2m fewer Americans were working compared with February 2020.

The jobs numbers for April represented a big disappointment compared with economists’ expectations that the US economy would have created almost 1m positions last month. While leisure and hospitality added 331,000 jobs, there were losses in other sectors of the economy, including car manufacturing, temporary help and retailing.

The figures were released at a time of intense debate among policymakers and economists about the extent to which the rebound under way in the US will trigger a jump in inflation.

Biden administration officials and senior officials at the Federal Reserve believe consumer price increases will be transient, but some economists and investors fear that the US economy is set to overheat in a risky way. The slowdown in job creation could damp those concerns. However, the data could raise fresh worries that labour shortages are holding back the recovery.

The lacklustre jump in job creation is likely to remove some pressure on the Federal Reserve to hasten deliberations on a first step to withdraw its monetary support for the recovery.

“Most of the other evidence suggests economic activity is rebounding quickly, but it is a clear reminder that the recovery in the labour market is lagging the rebound in consumption,” said Michael Pearce, senior US economist at Capital Economics.

“For the Fed, we suspect that means it will be a many months before it judges the economy has made ‘substantial further progress’ towards its ‘broad based and inclusive’ full employment goal. That means any talk of tapering, let alone rate hikes, is still some way off,” he added.

The data will make it harder for the White House to claim that its initial $1.9tn stimulus bill is working as planned, though it could validate its insistence on the lingering need for fiscal support.

The Biden administration wants Congress to take much broader fiscal action with plans to increase spending by a combined $4.1tn on US infrastructure and the social safety net over the coming decade, paid for with higher taxes on the wealthy and large US companies. 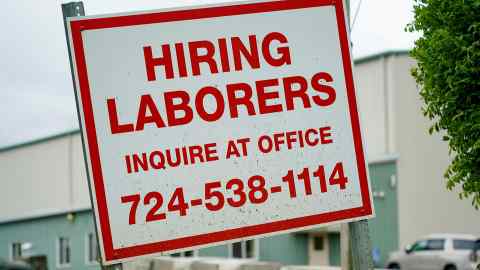 Still, Republicans are likely to pounce on the slowdown in job creation as evidence that the president’s policies are failing to generate a rapid rebound even amid widespread vaccinations and benefits to many families from a new round of stimulus cheques.

The yield on the 10-year note, which moves inversely to its price, dropped to 1.48 per cent, 0.1 percentage points below its Thursday high, before bouncing back above 1.55 per cent. The two-year note yield briefly fell to its lowest level since March before rebounding to 0.14 per cent.

Equity markets jumped at the start of trading, with the S&P 500 up 0.7 per cent. The Nasdaq Composite, heavy with growth stocks that are highly sensitive to interest rate changes, rose 1.2 per cent.

Implied rates on eurodollar futures, contracts that offer a gauge of the market’s expectation of interest rate policy, also fell on Friday in a signal that a rate rise by the Fed may not come as soon as investors had previously thought. The dollar, measured against a basket of currencies, hit to its lowest level since February.

“The weakness is totally baffling,” said Thomas Simons, an economist with Jefferies. “Nothing in the lead-up to today suggested that we would see a weak number.”

But economists Kathy Bostjancic and Gregory Daco at Oxford Economics suggested it was merely a “breather”.

“We expect employment will accelerate significantly with the economy adding over 8m jobs this year and the unemployment rate falling to 4.3 per cent by year-end,” they said.