The Financial Conduct Authority disclosed the probe of the collapsed supply-chain finance firm in a letter from Nikhil Rathi, the FCA chief executive, to Mel Stride, the Conservative MP who chairs the House of Commons Treasury select committee.

The comments are the first confirmation of involvement by the regulator after Greensill went into administration in March. Rathi said the FCA was co-operating with authorities in Germany, Australia, Switzerland and other countries.

The revelation emerged in a wider release of letters and documents by the committee, including a deluge of chummy messages from Cameron to government and Whitehall figures in early 2020 begging them to help Greensill.

“The failure of Greensill again demonstrates the need for regulators around the world to work closely together to fully assess the risks created by those financial entities that span multiple jurisdictions,” he said.

Asked by Stride when the FCA first became aware of potential financial difficulties at Greensill, he said it was “aware of” a Financial Times report in May 2020 that a string of its clients had defaulted on their debts in high-profile collapses and scandals. In “early 2020” it was aware of widespread distress in markets, he said.

A spokesman for the FCA later said it first became aware of potential Greensill difficulties in March 2020.

Greensill Capital’s UK business was only registered with the FCA for anti-money laundering purposes. Mirabella oversaw an entity that arranged deals with clients such as Sanjeev Gupta’s GFG Alliance, an industrial conglomerate which grew rapidly with Greensill’s funding.

Lex Greensill, the company’s Australian founder, told a hearing of the Treasury committee on Monday that the withdrawal of insurance was the “ultimate” cause of its demise. The collapse of Greensill has raised concerns about the future of GFG, which employs thousands of Liberty Steel workers in the UK whose livelihoods now hang in the balance.

In two hours of robust questioning, Labour MP Siobhain McDonagh asked Greensill if he was a “fraudster” given the company’s heavy use of future receivables: “No Ms McDonagh I am not,” he replied.

Later he said: “At no point would I or my firm have engaged in financing receivables which we knew to be fraudulent.”

He denied claims by Felicity Buchan, Tory MP for Kensington, that his business was providing “unsecured lending dressed up as supply chain finance”.

He said GLG was not Greensill’s biggest client but admitted: “We did have a concentration on certain customers that was too high.”

Cameron bombarded a plethora of cabinet ministers and officials, including Cabinet Office minister Michael Gove, via text, WhatsApp, email and phone calls in a bid to change the rules around Covid-19 debt schemes to the benefit of Greensill.

Although those attempts failed, Greensill did go on to access £400m through the government’s “CLBILS” scheme for its clients. 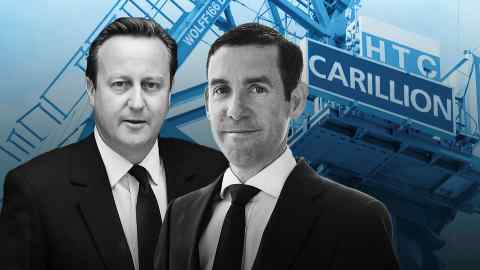 In a message to chancellor Rishi Sunak on April 3, 2020, Cameron praised the chancellor: “You are doing a great job — keep going”.

Cameron messaged Sir Tom Scholar, the permanent secretary at the Treasury. “See you with Rishi’s for an elbow bump or foot tap. Love Dc,” [sic] he said.

At one point he apologised to Scholar for hassling him: “One last point then I promise I will stop annoying you.” The next day, left empty-handed, he said: “Am now calling CX (Sunak), Gove, everyone.”

A separate submission to the committee by the Treasury said that it had conducted a detailed assessment of the Greensill proposal, concluding it did not provide value for money.

Furthermore, two other supply chain finance providers said they were not interested in using the proposed scheme.

However, the department did put forward a call for evidence on May 1 last year, suggesting supply-chain finance providers could be brought into the scope of the Bank of England’s Covid Corporate Financing Facility (CCFF) — in line with Greensill’s request. On June 26 the Treasury concluded, after widespread feedback, that the initiative would not bring enough benefits.

The Treasury admitted that a “small number of junior officials” were engaged part-time over three months in examining the proposals.

Cameron is scheduled to appear before the Treasury select committee on Thursday.

Andrew Bailey, Bank of England governor, said in a submission to the committee that the BoE first became aware of “a potential weakness” at Greensill in March 2020.