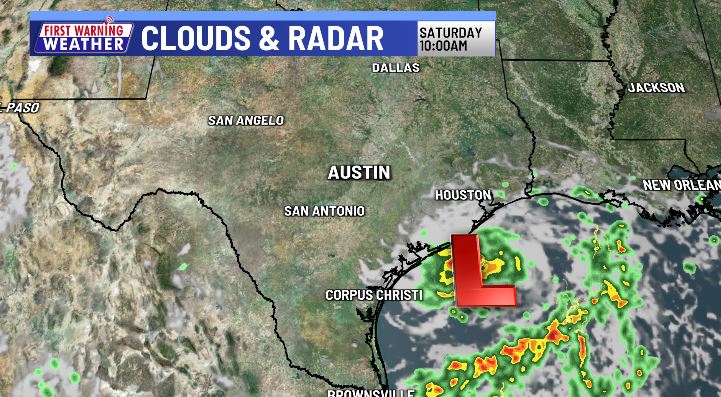 Austin (KXAN) — A low pressure system in the northern Gulf of Mexico has a high likelihood of bringing heavy rain to parts of Texas this weekend. Let’s get into it…

A trough of low pressure off the coast of Louisiana continues to bring heavy rain and thunderstorms to parts of the northern Gulf Coast states Friday morning. Most forecast models push this area of disturbed weather into south Texas this weekend. The question is… will it have time to further organize before it reaches land? And if so, where is it going?

Here’s what it means…

As of 7AM, the National Hurricane Center has put a 10% chance of further development on the area.

It’s unlikely this becomes a big mean storm as this system will run out of ocean real estate and lose the opportunity to become anything stronger. However, it is likely that parts of coastal Texas receive heavy rain (1″-4″) and potential flooding as this low nears the state this weekend.

Worst case scenario – a weak tropical depression (or highly unlikely, tropical storm) makes landfall along the coast of South Texas. Only one or two high-resolution forecasts models show even the hint of this happening… which tells us this scenario is not favored.

What about Central Texas?

With 24-48 hours of wiggle room, the track of this low will be one to watch as it’ll have noticeable implications on our weekend weather here in Central Texas.

If the track begins to trend north, our rain chances will increase Saturday into Sunday. This will not only bring in better rainfall potential but will in turn, keep our temperatures relatively cooler and push off the return of the triple digit heat one more day.

If the track begins trending further south, Central Texas will get caught on the “hot and dry side” of the storm resulting in lower rain chances and a near-guarantee of triple digits.

At this point in time, our forecast calls for a drier Sunday with only a few isolated showers likely in the afternoon.

It is worth noting that as many families are likely to head to the beach to celebrate students’ final weekend of summer break, the chances for a weekend washout are looking likely along the coast with rain chances up to 80% in Port Aransas, TX on Saturday.