Despite the launches of various competing apps and functions, and a rising push to steal away its top stars, TikTok continues to grow, with new stats from Sensor Tower underlining the app’s enduring popularity, and resilience, as it takes on the bigger players.

According to Sensor Tower, TikTok, when you also include the Chinese version of the app called ‘Douyin’, has now surpassed 3 billion total installs globally – becoming the first non-Facebook app to reach that mark – while it also continues to see strong growth momentum in 2021. 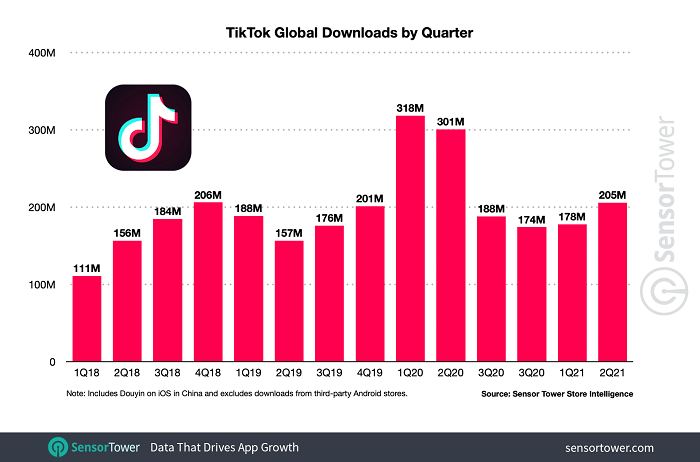 As per Sensor Tower:

“TikTok was the most downloaded and highest-grossing non-game app globally in the first half of 2021, reaching nearly 383 million first-time installs and an estimated $919.2 million in consumer spending. Although new downloads of the app were down 38 percent year-over-year from nearly 619 million in 1H 2020 – a decline partially attributable to its removal from India’s app stores – consumer spending in TikTok was up 73 percent from $530.2 million in the year-ago period.”

Which is a key point for TikTok’s future growth, because while user growth is essential, being able to convert that captive audience into actual revenue is the real indicator of business success.

More spending will also help TikTok maintain its growth, because as noted, both Facebook and YouTube, recognizing the significant threat that TikTok now poses, have been working to improve their creator monetization tools, in an effort to lure popular stars across to their platforms, offering both bigger reach and income potential for their efforts.

TikTok needs to be able to provide comparative value for creators in order to keep up, and while size remains in favor of the bigger players (for now), its the real money side of the equation that could still sink TikTok, if it can’t find ways to match up, and its most popular stars do end up migrating to greener pastures, taking their audiences with them.

That’s what happened to Vine, which had no effective monetization process, which is why TikTok is doing all that it can to improve its eCommmerce tools, and facilitate more brand/creator partnerships.

But it remains an uphill battle. Snapchat went direct for this element with its TikTok-like Spotlight offering, shelling out $1 million a day to the best Spotlight clips (which it’s since reduced to ‘millions per month‘ instead). Just today, Facebook announced a new $1 billion dollar creator fund to add more incentive within its apps.

TikTok can’t spend at the same rate Facebook can, but the true key lies in building a sustainable creator ecosystem, which it’s hoping to establish with these elements.

Again, the spend data from Sensor Tower is a good sign on this front, showing that users are willing to make transactions in-app.

It’s amazing to consider the growth of the app – particularly when you take into account that it also lost its second-biggest user market in the middle of last year (in India), which should really have caused more of a bump in its stats.

But TikTok keeps on going, and keeps on building momentum. Which has Facebook and YouTube spooked (and likely whispering in the ears of people in Washington about the threat posed by Chinese-owned apps), and given the charts above, it’s easy to see why. TikTok, particularly with its hold on younger audiences, now has the potential to become the key app, much like Facebook rolled over MySpace in the early 00s.

It may not be at that level just yet, but Facebook knows all too well that getting a foothold with the youngsters is the way to market dominance.

And just like Facebook, you can’t overlook the potential of what that may mean in the broader scheme.