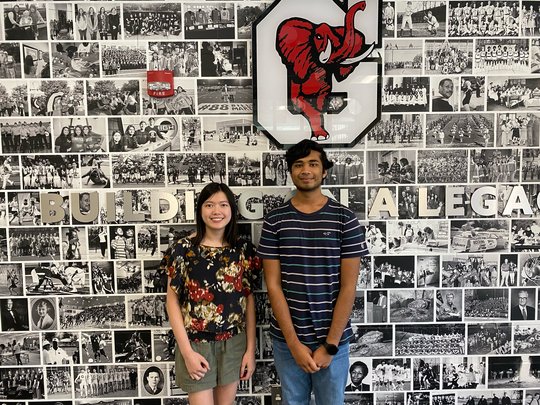 Seniors Hassan Khan and Alyssa Woo are among over 16,000 semifinalists in the 68th annual National Merit Scholarship Program, who represent less than 1% of all high school seniors in the United States.

Khan and Woo are the only students in Hall County to make it this far in the competition, said Gainesville High Principal Jamie Green.

“That’s what’s really exciting about this, is having two finalists, two people from here in Gainesville that are competing against the rest of the nation for this scholarship recognition,” Green said.

“We’re really proud of Alyssa and Hassan,” he said. “Of course, they come to us with innate talent and motivation, but it’s wonderful to see them blossom.”

Students compete for 7,250 scholarships worth nearly $28 million, which will be awarded next spring.

The scholarship was established in 1955 at “a time in which there was concern that the United States was lagging behind in the Cold War scientific race, but the public was indifferent to rewarding intellectual accomplishment,” according to the National Merit Scholarship Corporation, a privately funded nonprofit organization.

Most of the semifinalists, over 15,000, will advance to the finalist level and will be notified in February, according to a release from the NMSC. The 2023 winners will be announced in four nationwide news releases from April through July, joining 368,000 others in earning the title of Merit Scholar.

A semifinalist must have an outstanding academic record throughout high school, be endorsed and recommended by a high school official, write an essay, and earn SAT or ACT scores that confirm the student’s earlier performance on the qualifying test.

To become a finalist, a semifinalist and a high school official must submit a detailed

scholarship application, in which they provide information about the semifinalist’s academic record,participation in school and community activities, demonstrated leadership abilities, employment, and honors and awards received.