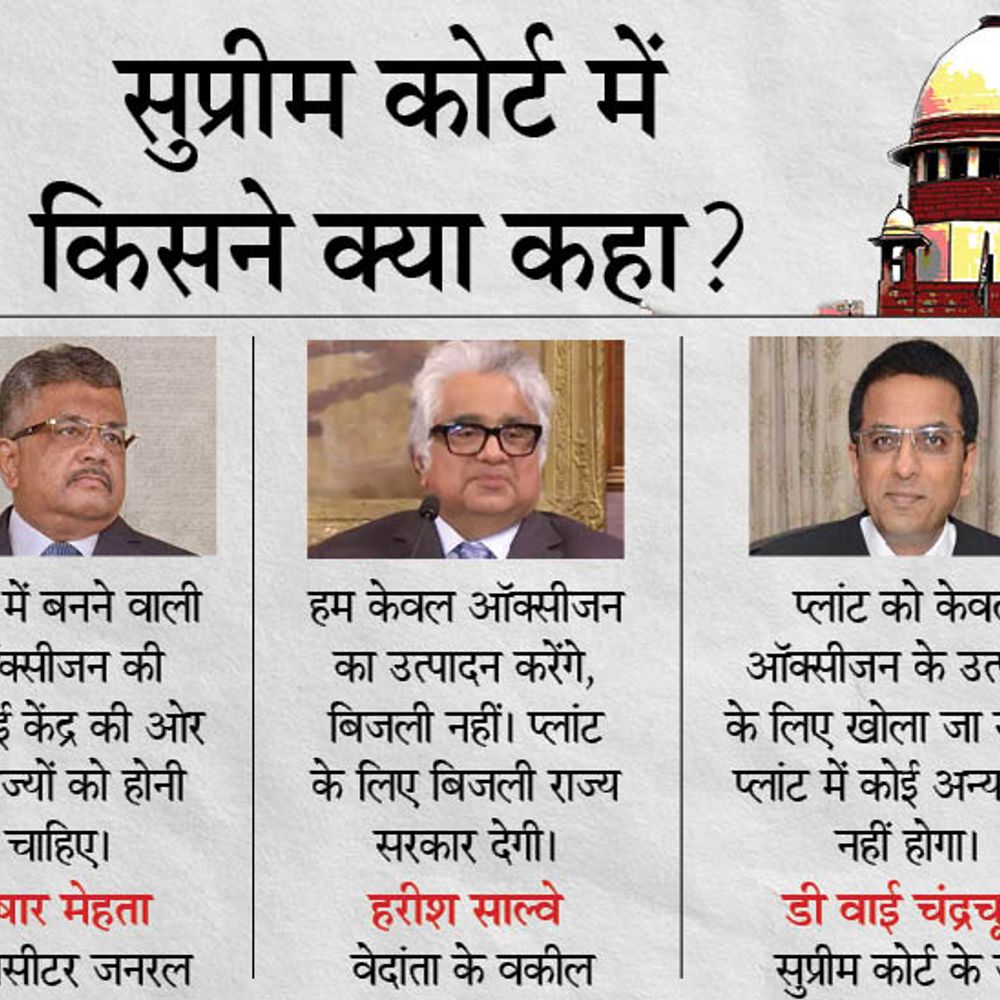 The Supreme Court said that as the country is going through a national crisis, there should be no political quarrel over oxygen being made in Vedanta.

However, the Supreme Court has also instructed Vedanta that it cannot do copper production under the cover of the order to open the plant.

There should not be a political quarrel over the opening of the plant – Supreme Court
The court said that as the country is going through a national crisis, there should be no political quarrel over oxygen being made in Vedanta. Vedanta is not going to get any kind of favor with this decision. Directed the Tamil Nadu government to form a panel which would monitor oxygen production at the Tuticorin plant. Justice DY Chandrachud said that we are only approving the production of oxygen. It will not be used for the production of other things.

On 23 April, the court said that people are dying of oxygen deficiency. Why the Tamil Nadu government does not take over Vedanta Sterlite copper unit for oxygen production. The plant was closed in May 2018 due to environmental damage.

The arguments of Center, Vedanta and other parties in SC

Center On behalf of the Solicitor General Tushar Mehta said in the court that the oxygen produced in this plant should be supplied to the states allocated by the Center.

Vedanta On behalf of Senior Advocate Harish Salve said that we want to start only the oxygen plant. There are no plans to start our power plant. The state government will provide electricity to run the oxygen plant. When Justice DY Chandrachud asked how long can you start this plant? To this Salve replied that we can start producing oxygen in 10 days.

Sterlite Gas Leak Victims Senior Advocate Colin Gonzalvis, appearing for the families of the families, said that Vedanta has been making frequent mistakes. To this, Justice Chandrachud said that at this time we are not hearing the appeal against the order of Madras High Court. We are only approving to run oxygen plant.

Tamil Nadu government has also approved the production of oxygen

The All Party Meeting was organized by the Tamil Nadu government on Monday. In this, Vedanta was approved to produce oxygen at the Sterlite plant for 4 months. In view of the increasing cases of Corona, the government had approved the production of 1000 tons of oxygen in this plant daily.

The Tamil Nadu government shut down Vedanta’s Tuticorin copper plant in 2018 due to violation of several environmental regulations. Earlier, 13 people were killed in violence during protests by local people. The National Green Tribunal (NGT) had on December 15 allowed the plant to be started, against which the Tamil Nadu government appealed to the Supreme Court.

In 2013, gas was leaked at the plant, thousands of people were affected.

Thousands of people were affected by the sulfur dye oxide leak that occurred here in March 2013. The oxygen facility of this plant was built in 2004, without taking environmental clearance. This was confirmed by the Pollution Central Board Committee made on the order of the Monitoring Committee of the Supreme Court.

GSK chief shrugs off concerns over leadership as she outlines plans

Mobile roaming charges in Europe: What you need to know