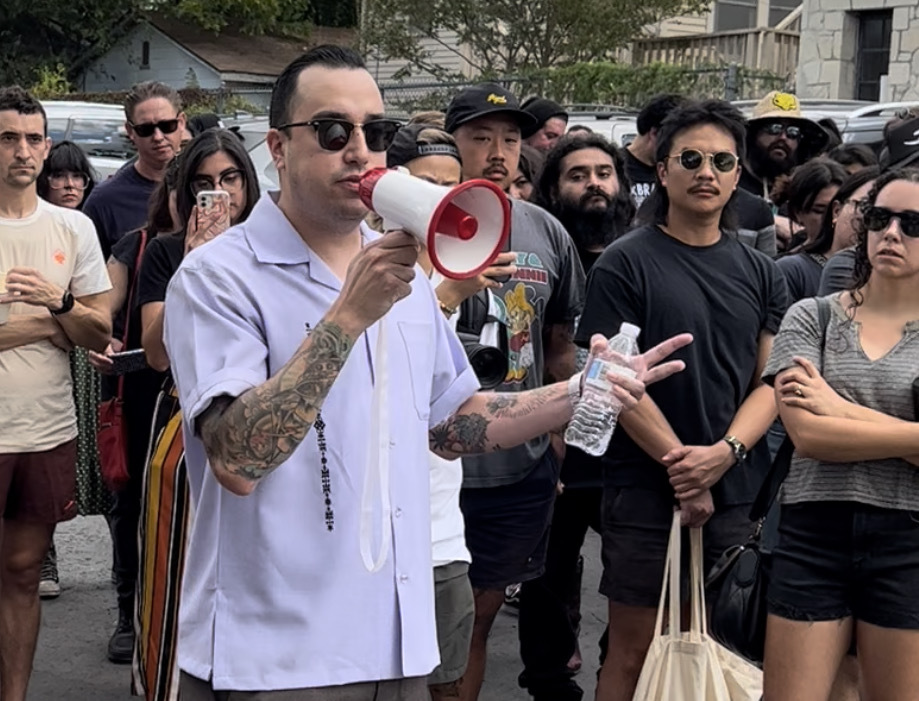 Over the weekend, tensions along the St. Mary’s Strip reached a stalemate between community members, business owners, and Mario Bravo’s District 1 office. On Saturday morning, September 24, Bravo’s camp set a community meeting to discuss a controversial proposed residential parking pilot program, an initiative widely opposed by business owners due to its impact on nightlife. To express their concerns, hordes of people packed into the parking lot of the St. Sophia Greek Orthodox Church.

Some residents of the growing Tobin Hill neighborhood, which is home to lifelong residents and new developments alike, have expressed frustration with the nightlife overspill on their blocks, ranging from noise concerns to frustrations with used condoms showing up in their yards. Those who stake their livelihood in the long-running cultural center and nightlife corridor claim that the proposed parking program would financially hinder businesses.

The Overnight Residential Parking Program would essentially eliminate street parking in the Tobin Hill neighborhood around businesses on the St. Mary’s Strip from the hours of 10 p.m. to 6 a.m.

During the meeting, business owners were also vocal about the slow process of ongoing construction happening on the zipper-torn street, originally funded by a 2017 bond project. The city has been slowly chipping away at the roadwork for over a year. Currently, a portion of the street is closed from Ashby Street to East Russell Place. The project is meant to re-purpose lanes to allow parking on either side of the road.

Reported vocal figures that emerged during the meeting included Aaron Pena, the owner of Squeezebox and mind behind the Fajita Lounge series, and Chad Carey, owner of the Empty Stomach Group, which claims multiple businesses on St. Mary’s, including Rumble, Paper Tiger, Little Death, and Midnight Swim.

The meeting followed an eventful week for Bravo, who was suspended on Friday, September 23, from City Council committee assignments and external appointments until further notice, according to a memo sent to city staff by San Antonio Mayor Ron Nirenberg. Bravo found himself in hot water after publicly and personally criticizing Councilwoman Ana Sandoval, a former romantic partner, during a meeting after she failed to support a proposal.

The consensus after Saturday’s meeting at St. Sophia’s seems to be that nothing was resolved, and that community voices weren’t seriously considered.

Following the meeting, the spirit of the majority was quickly captured by local artists and meme makers.

Isabel Ann Castro, an artist and cartoonist shared a political cartoon about the meeting, criticizing the meeting’s poor organization and lack of consideration for community needs.

Deco Memes District, a meme account and watchdog of perceived local buffoonery has quickly developed as a critical voice for local industry and community minded infrastructure. It was no surprise that the account churned out a series of pointed commentary that identified some of the the key issues while also poking fun at the circus.

Many other locals, including former District 1 Councilman Diego Bernal, shared their frustrations and proposed solutions online.

As a former D1 Councilperson and current State Rep with much of the same jurisdiction, I have a LOT to say. But I’ll start with this:

Restricting access to public spaces should be a last resort.

We should exhaust all other options before we take such a drastic approach.

Aaron Pena @CleanGuayabera said forums like this are performative and welcomed everyone to his bar @TheSqueezeboxSA to have conversations with the community about solutions. Many residents stopped by squeezebox afterwards. pic.twitter.com/Tm87zZO9Di

194 (‼️) Airbnb listings in Tobin Hill. $140 a night right on the strip. Gambling away our culture so they can get 5 star reviews from tourists?? We’re supposed to think this has nothing to do w/ good old fashioned cookie cutter gentrification??? ?” pic.twitter.com/DUuH8oSJS8

Things that would improve the Strip for the neighborhood and businesses:
-Parking Garage with bathrooms
-Centro cleaning expanded to the strip
-Better Public transportation, the 8 bus doesn’t even have lineups!
-Creating an access road for the streets that dead end by 281

The Strip is puro.

It’s the spot where live music and dancing reign, where a group of people can hang out and enjoy life, where street tacos can be enjoyed on the street. It’s not for tourists – it’s for San Anto.

Can’t we find some balance? And some parking? https://t.co/WEGKerZAHy

As one that frequents The Strip, it’s very painful to see all this talk of permitted parking when businesses have already been hit by so much; the plague, endless construction, the new noise ordinance, and now this, the prospect of zero overnight parking.

I can’t get over the fact that “gunfire” is one of the excuses being used to restrict parking on public streets. In Texas, folks can carry a handgun without a license now. Talk to Greg Abbott about that not @CleanGuayabera and @TheMontereySA. #SATX https://t.co/vmGN7bdZEH

For those interested in attending, another community meeting on the topic is being held on October 8 at 2 p.m. at San Antonio College Victory Center.