Ukraine accused Russia of destroying homes in the southeast and knocking out power in many areas with a new volley of missiles on Monday, while Moscow said Ukrainian drones had attacked two air bases deep inside Russia hundreds of kilometres from the front lines.

A new missile barrage had been anticipated in Ukraine for days, and it took place just as emergency blackouts were due to end, with previous damage repaired. The strikes plunged parts of Ukraine back into freezing darkness with temperatures now firmly below zero Celsius (32 Fahrenheit).

At least four people were killed in the Russian attacks, Ukrainian President Volodymyr Zelenskyy said, adding that most of some 70 missiles were shot down. Energy workers had already begun work on restoring power supplies, he said.

Russia’s defence ministry said Ukrainian drones attacked two air bases at Ryazan and Saratov in south-central Russia, killing three servicemen and wounding four, with two aircraft damaged by fragments of the drones when they were shot down.

Ukraine did not directly claim responsibility for the attacks. If it was behind them, they would be the deepest attacks inside the Russian heartland since Moscow invaded Ukraine on February 24.

One of the targets, the Engels airbase near the city of Saratov, approximately 730km (450 miles) southeast of Moscow, houses bomber planes belonging to Russia’s strategic nuclear forces.

“The Kyiv regime, in order to disable Russian long-range aircraft, made attempts to strike with Soviet-made unmanned jet aerial vehicles at the military airfields Dyagilevo, in the Ryazan region, and Engels, in the Saratov region,” the Russian defence ministry said.

It said the drones, flying at low altitudes, were intercepted by air defences and shot down. The deaths were reported on the Ryazan base, 185km (115 miles) southeast of Moscow.

Despite that, the ministry said, Russia responded with a “massive strike on the military control system and related objects of the defences complex, communication centres, energy and military units of Ukraine with high-precision air- and sea-based weapons” in which it said all 17 designated targets were hit.

Ukraine’s air force said it downed over 60 of more than 70 missiles fired by Russia on Monday – the latest in weeks of attacks targeting its critical infrastructure that have cut off power, heat and water to many parts of the country.

“Our guys are awesome,” Andrii Yermak, head of the Ukrainian presidential staff, wrote on Telegram.

Saratov is at least 600km (373 miles) from the nearest Ukrainian territory. Russian commentators said on social media that if Ukraine could strike that far inside Russia, it might also be capable of hitting Moscow.

President Vladimir Putin drove a Mercedes across the bridge linking southern Russia to Crimea on Monday, less than two months since the structure was also hit by an explosion.

Kyiv has not claimed responsibility for any of the blasts, saying only that they were “karma” for Russia’s invasion. 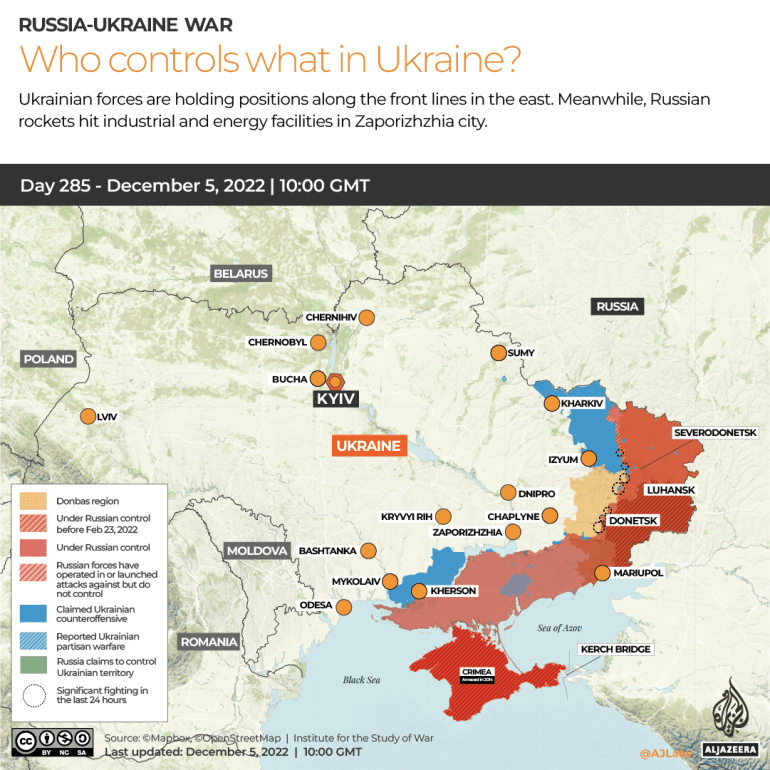 “If something is launched into other countries’ air space, sooner or later unknown flying objects will return to [their] departure point,” Ukrainian presidential adviser Mykhailo Podolyak tweeted, tongue in cheek, on Monday.

Meanwhile, Moscow has been hitting Ukraine’s energy infrastructure roughly every week since early October as it has been forced to retreat on some battlefronts.

This time, police in Moldova were reported to have found missile fragments on the country’s soil near the border with Ukraine.

In the Zaporizhia region, at least two people were killed and several houses destroyed, the deputy head of the presidential office, Kyrylo Tymoshenko, said.

Missiles also hit energy facilities in the regions of Kyiv and Vinnytsia in central Ukraine, Odesa in the south and Sumy in the north, officials said.

Ukraine had only just returned to scheduled power outages from Monday rather than the emergency blackouts it has suffered since widespread Russian strikes on November 23, the worst of the attacks on energy infrastructure that began in early October.

Russia has said the barrages are designed to degrade Ukraine’s military. Ukraine says they are clearly aimed at civilians and, thus, constitute a war crime.