Here’s a small, but interesting new update in the Reddit posting process. As announced on the Reddit blog, the platform is in the process of rolling out some new image editing tools which will enable users to customize their visual uploads before they post. 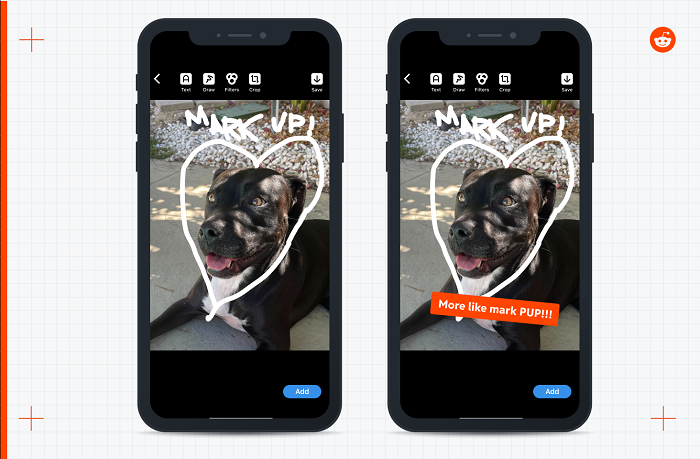 As you can see in this example (starring Luna), Reddit’s adding Stories-like editing options into its upload flow, which will provide new ways to display visual content in the app.

“To make it easier to post images directly to Reddit, next week those adding images on iOS will have the ability to crop, rotate, or markup images with text, stickers, or drawings. Next up is Android, so stay tuned for more updates.”

The tools are actually a layover from Dubsmash, which Reddit acquired back in December 2020. Last November, Reddit flagged the coming addition of these new visual tools as part of its integration of Dubsmash elements into its main app, which will also include new recording speed options for video, recording timers, the capacity to upload clips in both landscape and portrait mode, new video clipping options, and more.

And as you may also note in the above image, Reddit’s also adding new ‘Filters’ for still image uploads. Most of these will likely be along the lines of Instagram’s basic visual enhancements, but they could also, eventually, incorporate AR elements into the process, providing another engagement option in the app.

Reddit been testing AR overlays for several months, with Bread Cat’ and ‘Snoo’ effects already available to some users.

Personally, I don’t see how these digital masks truly fit into the Reddit experience, but with usage of its TikTok-like video feed increasing significantly of late, there does seem to be a potential use case for these types of fun effects within short clips, aligning with the broader short-form content trend.

Reddit’s been trying to re-shape itself as a more ad-friendly platform of late, in order to capitalize on the potential of its 52 million daily active users. Though Reddit usage has also taken a hit over the last couple of years, with its cull of thousands of its more controversial subreddits in 2020 reducing overall usage, but improving brand safety and appeal.

Back in December 2019, Reddit reported that it was serving more than 430 million monthly active users, but in December a year later, following the cull, it switched to daily active usage stats instead, which Reddit says is “a more accurate reflection of our user growth, and more in-line with industry reporting”.

So we don’t know, for sure, what the full impacts of that cull have been, but it seems pretty likely that there’s been a big shift in its usage stats, based on daily to monthly conversion (for comparative measure, Snapchat serves 319 million daily actives, and 500 million monthly users).

Still, that was likely a necessary change, given the platform’s long-standing reputation as a haven for controversial content, and Reddit is now hoping to re-shape its updated platform with new tools and options to better align with overall social media usage trends.

It remains to be seen how open Reddit’s community will be to such, but the capacity to edit images – along with audio rooms, live-streaming, in-community chat and more – expands on Reddit’s offering, and could help to promote more interaction in new ways.