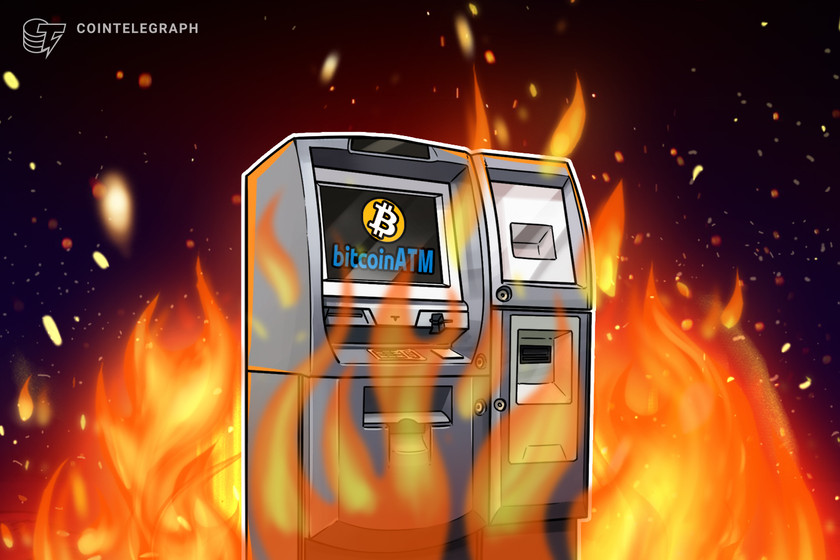 Bitcoin detractors and those protesting the policies of El Savador President Nayib Bukele have destroyed a crypto kiosk in the nation’s capital city.

News outlet Teleprensa and others posted videos on social media showing a Chivo-supported kiosk in San Salvador burning amid a crowd of journalists and protesters on Wednesday. The Bitcoin (BTC) machine, one of many arranged by the El Salvador government since its acceptance of the cryptocurrency as legal tender in the country, could be seen defaced with anti-BTC logos and a sign saying “democracy is not for sale.”

The protesters burned the Chivo kiosk as a measure of protest against the #Bitcoin.

San Salvador Mayor Mario Durán said city workers had pulled out of the area after receiving threats but planned to return later this afternoon. At the time of publication, the damage seems to be limited to the Chivo machine in the Plaza Gerardo Barrios in the center of the capital city, but protesters also reportedly burned furniture from one of the plaza’s shops.

The Chivo kiosk — similar to a Bitcoin ATM — is one of roughly 200 in El Salvador, part of the government’s rollout to accept BTC as legal tender alongside the U.S. dollar. President Bukele has said he hopes the crypto ATMs will eventually be “everywhere” in the country, but has claimed that no one will be forced to use Bitcoin.

Even before the Bitcoin Law went into effect on Sept. 7, El Salvador faced resistance to the seemingly radical legislation. Protesters calling themselves the Popular Resistance and Rebellion Block marched in the capital city streets in July, while a group consisting of retirees, veterans, disability pensioners and other workers formed their own demonstration the following month.

#️⃣ #NOW | Great marches in El Salvador, against President Bukele, for the use of Bitcoin. pic.twitter.com/fnsBjQIJ0e

The same day the country’s Bitcoin Law went into effect, the price of the crypto asset dipped below $43,000, prompting Bukele to say he had “bought the dip” with the purchase of an additional 150 BTC. At the time of publication, the BTC price is $47,978, having risen by more than 3% in the last 24 hours.