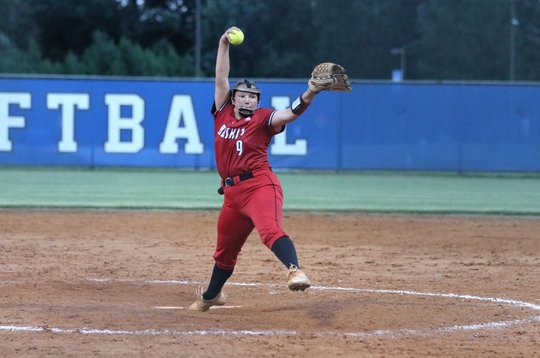 COVINGTON, Ga. — One area team opened a new season with a win while the other began with a loss. Social Circle downed Newton 7-3 Wednesday night on the Lady Rams’ home field.

Lady Redskins head coach Chris Davis mentioned how, beginning a new season 1-0 signifies “getting a monkey off their back.”

“It’s easier to go over mistakes when you’ve won,” Davis said. “But, more importantly, it’s about getting that monkey off your back. You want to get that first [win] and then it just helps you relax.”

Senior Macy Langley started in the pitcher’s circle for Social Circle and had a solid outing. She registered four innings pitched, struck out six batters and didn’t allow a single run. In relief, Abbey Land came in for three innings, gave up two hits, one earned run and recorded four strikeouts.

In addition to her pitching performance, Langley accounted for three runs in the Lady Redskins’ six-run fourth inning.

Leading 4-0 with one out, Langley tripled on a fly ball to center field that brought Madalyn Spinks and another runner across home plate. Two at-bats later, Langley was brought in to score off a Kaylynn Scaffe groundout to shortstop.

That would be the final run Social Circle would score the rest of the game, but that was enough to bring home the win.

Langley went 3-for-4 at the plate with four RBIs. Laura Tulley, Scaffe and Kyla Head assisted with an RBI apiece, too.

Overall, Davis was pleased with his team’s performance.

“I was really happy with our pitchers as they attacked the hitters,” Davis said. “We’re keeping the ball down, which forces the hitter to hit the ball down. We had great at-bats and we knew what to do with our at-bats. Being able to see things in action that we worked on in practice was huge.”

Meanwhile, Newton struggled to get its offense going all night.

As a team, the Lady Rams went 8-for-30 at the plate with 10 strikeouts and three walks. In the bottom of the fourth, though, Newton found a little spark.

Facing one out, a Newton batter singled on a bunt to first base that allowed a runner to score. Then, senior Kyla Stroud grounded into a fielder’s choice that brought a runner home to score.

Newton’s final run came in the seventh inning when LeLani Garcia singled to center field that scored Stroud from second base.

But it was too little too late as the Lady Rams could not overcome the five-run deficit.

Next up for Newton will be its region opener on Aug. 18 versus Brookwood at home. For Social Circle, it’ll continue non-region action on Tuesday, Aug. 23 versus Oconee County.