Here’s something I didn’t know until I became a NICU parent: In the United States, one in 10 babies are born prematurely. Many preterm babies require a NICU stay, with the average length being 13.5 days. Though I had little idea of what I was doing when I brought home my twins from the NICU, I did know that I was going to continue to monitor their vitals stats using an Owlet sock. My partner and I had become accustomed to checking their heart rate and pulse ox levels on a hospital monitor, and being able to get that information at home helped us build confidence in our role as non-professional caretakers to two very tiny humans.

In both the NICU and online parenting forums, multiple people recommended the Owlet. It’s specifically these fans the brand was responding to with the recent release of $359 Smart Sock Plus, a larger sock with an updated algorithm that can be used on children up to five years old or 55 pounds. That’s a decent leap from the previous 18-month/30-pound cut-off that my kids just passed. The company claims that 72 percent of the parents it polled said they’d like to use their Smart Socks for longer, and that certainly included me. 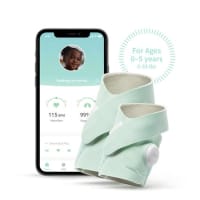 The third-generation Owlet monitoring system featured a redesigned “butterfly” style sensor that fit into an updated fabric sock, and it’s more of the same with the Plus. You’ll find the same removable sensor with a protruding button that attaches to the Base Station for wireless charging when not in use, along with the same winged, Velcro attachments for switching it between socks.

It’s also still lightweight, easy to remove and replace, and fast charging. Owlet says a full charge takes an hour and a half, and you can get eight hours worth of use with only 20 minutes of charging. That bore out in testing when I was able to grab a full night’s worth of battery life in the time it took to finish our bedtime routine with the kids. The compact, more subtle Base Station is also the same as the one found on the smaller smart sock model.

The new sock has a similar construction, too, including a soft, flexible fabric strip that fastens around the ball of the foot to keep the sensor at the outside of the little toe. And there’s an ankle band to secure the whole thing in place. The Smart Sock Plus comes with the same four initial sock sizes: left and right for under 12 pounds; and left and right for 12 to 30 pounds; plus an expansion pack of left and right socks for 30 to 55 pounds. It’s worth noting that currently the Smart Sock Plus is only available in the classic Mint Green shade, and not the Deep Sea Green or Dusty Rose colors.

I had issues with the fit on the last sock, and was pleased to find that the Plus version for larger kids (30-plus-pound) seemed less prone to unintentional slippage. I say unintentional because my kids have just learned to work Velcro so they can, very purposefully, take the sock off. While they were proud of themselves for their accomplishment, this underscores the challenge in offering a sock for older children: It might be a fight to get them to keep it on.

One of the user reviews I read for the original Owlet sock recommended putting a regular sock on over the smart one to keep it from sliding around. I tried that and found that it worked well for my son, but less so with my daughter who has better dexterity. That’s unlikely to solve the issue for the length of the sensor’s life, though I’d expect older children can be taught to wear the sock to sleep. I asked Owlet what they recommend to keep the sock in place in these instances, and they, too, suggest using a regular sock or footie pajamas. They also claim some parents wait until their kids are asleep to put the Smart Sock on, but those folks are braver than I.

Because the sock fits better, I had fewer disconnection error alerts. In fact, the only time I received alerts due to a misaligned sock were times when my kids had actually removed it. Given that frequent unexplained alerts were one of my pain points with the last version, it was nice to see that had improved. I got consistent readings when they were in fabric socks or footie pajamas, and also when they were under a blanket. What’s more, I had no problem keeping the Base Station in my office, next door to my kid’s room; it was still easily able to keep everything connected.

I will say that the sock still seemed to run out of battery quicker than the second-generation one did, but it was comparable to the third gen. While the sock could reliably make it through an evening of monitoring (roughly 7pm to 7am), I occasionally saw low-battery warnings in the morning. However, these warnings indicated that I had less than four hours of runtime, which seems like plenty of time.

Every time I set up an Owlet device, I hit a snag. This time, instead of connecting to the Owlet in my WiFi settings, I was instructed to go through the Privacy settings and toggle on the Local Network option. But the Owlet app kept telling me to check the permissions, even after I’d turned them on. And off. And on again. And closed and restarted the app.

Although this is the first time I had to call Owlet support for a resolution, I was able to easily get through to a live person and resolve the problem in a little over five minutes (thanks again, Jill!). I haven’t had any problems since.

As with the rest of the Plus experience, the app remains largely unchanged. The difference here are the updated algorithms that Owlet is using to calculate data for kids in the 18-month to five-year range. Because the sock can now fit more kids, the algorithm has to accommodate for physical changes over time. Owlet says a good example is heart rate, which changes as a child gets older.

Aside from that, you still get a dashboard to access each child’s profile, which contains their live heart rate and pulse ox data, the battery life of the sock and WiFi connection status. If you’re also using the Owlet Cam as a video monitor, you’ll see the feed here. Previous days’ data can be found under History, which includes an overview and info graphs. This has always been one of the most useful portions of the app for me, as it showed me the trends on when my twins were — and were not — doing well sleeping.

As I mentioned, I haven’t yet had any false alerts, though I’m not sure what to chalk that up to — faster internet at my new house? A better fit on the sock? Upgraded algorithms? Either way, it’s nice to report on a better experience, especially given the price difference between the $359 Plus and the $299 third-gen sock.

There aren’t a ton of products out there similar to Owlet’s sock. The company has seemingly cornered the market on baby wearables that measure pulse ox and heart rate, but there are a few other noteworthy devices in this space. One of them is the Nanit system, which pairs a camera with an item of the company’s Breathing Wear clothing to monitor respiration and sleep as well as provide a video feed. The Complete Monitoring System, which includes app subscription extras like two days of video history, comes in at $379. In testing, the Breathing Wear worked as advertised and the camera offered an impressively clear 1080p HD feed. I’ve also used the Pampers Lumi, a solid $187 camera-slash-wearable that only tracks diaper changes and sleep patterns. However, it looks like the sensor is hard to come by right now — we’ve reached out to Pampers to see if the Lumi sensor and companion diapers are still widely available.

The Owlet Smart Sock Plus fills a need for people who are already on the Owlet bandwagon: It allows parents to continue using a product they like and are comfortable with for a longer period of time. Other than better algorithms and a larger sock, there’s not much difference between the Plus and the third-gen device — which was absolutely an improvement over the version that came before it. I’d expect the $69 expansion pack to sell well, as it provides what current customers will need to upgrade to the next sock level, but $359 is a high barrier to entry for a baby monitoring system that may not work for your sleep routine. That said, if you’re an Owlet customer who is happy with your current smart sock, it’s unlikely you’ll regret snagging an expansion pack when your kiddo has gotten big enough.

How to Expand Your Reach with Newsletter Advertising

As marketers search for creative ways to reach new leads, newsletter advertising is becoming a staple in the industry. With effective targeting and high...

Bitcoin (BTC) is a New York state of mind thing for Eric Adams, the crypto advocate serving as the 110th Mayor of New York...

Russia’s recent ban on crypto has drawn criticism from a number of big names, including Alexei Navalny’s chief of staff Leonid Volkov, and Telegram...

Everywhere you look, podcast stats are growing. The number of listeners, shows and episodes has each exploded, and the industry is showing no sign...

Hackers attacked a number of popular crypto YouTuber accounts at some point during the afternoon of Jan. 23. The accounts posted unauthorized videos with...

A logo of the State Bank of Pakistan is pictured at a reception desk at the head office in Karachi, July 16, 2019. Photo:...

This week on the iMore Show, we look ahead to some spring rumors as we all fight the cold of winter. Listen now Subscribe...

TikTok’s Working on a New, Opt-In Function to Show You Who Viewed Your Profile

I’m not entirely sure what value this might bring, but TikTok is reportedly working on bringing back the option to see who viewed your...

The Best Tips to Fast Index Website On Google (100% Works)

How to index website on Google? Do you want to drive more organic traffic to your new website? I am sure your answer is...

In this post, I will discuss the top ten profitable blogging niches ideas for Adsense approval and high traffic. whether you use Blogger or...

How to Rank in Google Image Search Page 2021?

Want to rank in Google image search? Images that you use as a featured images when writing a post actually appear on Google Images...