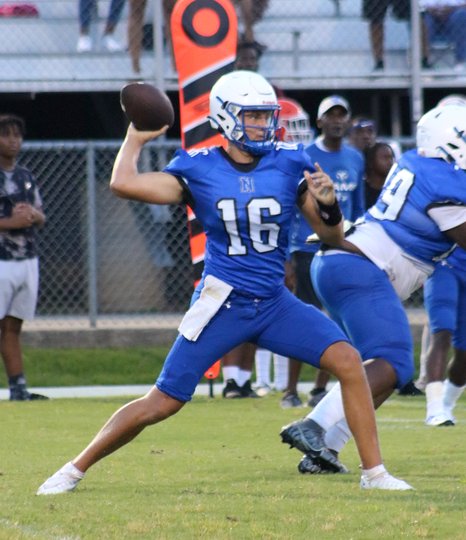 There will be a new gunslinger under center for Newton this fall.

Three-year starter Jevarra Martin Jr. graduated from the program. As a result, the Rams must now hand the reins of the offense to someone else.

With Martin out of the picture, junior quarterback Riley Scruggs has been tabbed as the Next Man Up for Newton.

“I’ve been dreaming about it since I was a freshman and I’m excited about [being the quarterback],” Scruggs said. “I’ve been putting in work since my freshman season and now it’s finally showing. And being out here playing at Sharp on Friday nights means everything to me.”

Scruggs found himself in a two-man race for the starting gig with fellow junior Jordan Nolley this summer. Naming Martin’s replacement proved no easy task, as neither arm built enough separation in June or July to win the job outright. But by early August, Scruggs thrust himself into the role of QB1.

On paper, Scruggs appeared to be the more natural fit for the Rams offense. Standing 6-foot-2 and 190 pounds, he looks the part of a starting quarterback in Class 7A.

Head coach Camiel Grant Jr., said the physical nature of Scruggs’ game was a factor in the final decision.

“Physically, we look at Riley as the most imposing of the two. And that translates into Riley throwing a better deep ball,” Grant said. “He has a little more strength to push the ball down the field. Has a little bit more zip on his passes.”

As with any transition, growing pains are to be expected. Scruggs will come into the year with limited playing time at the varsity level. He won’t have much time before being baptized by fire, either, as the Rams will be opposed by perennial powers Hapeville Charter, McEachern, and Westlake in the first five weeks of the season.

What Newton lacks in experience at quarterback, it makes up for with talent at its skill positions. The club’s running back room and receiver corps, respectively, are among the best they’ve had in recent years. Grant alluded to this, saying Scruggs will “have some guys that can light it up if [he] can get the ball to them.”

Even though it’s been a tight competition all offseason, Scruggs has relished it all heading into his junior season.

“The summer’s been great. We’ve just been competing every day, getting better,” Scruggs said. “We just keep getting better and having fun; that’s all we really can do.”

In the weeks and months ahead, Scruggs will be asked to show just how much better he’s gotten.