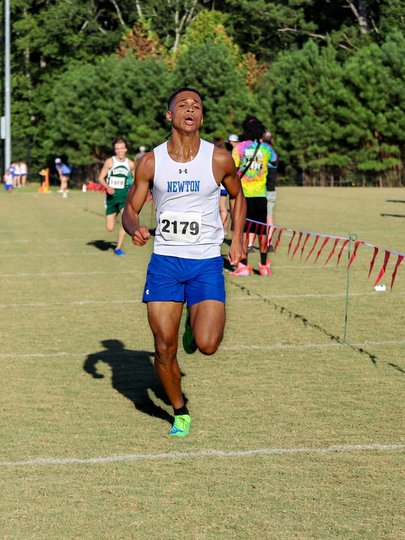 Eastside’s team, though, had the highest finish from the area placing second overall. Head coach Michael Jorgenson was pleased with his team’s performance.

“I’m very proud of the efforts of our athletes in training hard and pushing themselves during practice after school,” Jorgenson said.

Grayson Poynter finished with a 18:08.19 final time placing him third in the boys varsity 5K. Henry Meller placed 10th overall with a 19:38.06 finish.

Though they didn’t finish in the top 10, assistant coach Caleb Watson highlighted Scharf, Hunt and Kingsley’s contributions to the second place finish for Eastside.

“It was a great example of every runner having an impact on the outcome, not just our top couple of runners,” Watson said. “Great team growth.”

Newton girls and boys teams wouldn’t be outdone as the Rams placed five runners in the top 25.

The top area finish was Kenton George who placed second finishing with a final time of 18:04.94 in the boys varsity 5K. Nia Barrett was the top finisher from all area girls teams with her eighth place finish after a 23:44.91 final time.

Barrett’s finish moves her into the top 10 for Newton girls listed in the Milesplit database that dates back to 2007.

“It was hot,” Wade said of Wednesday’s weather. “I was impressed with how well most of the kids handled the harsh conditions.

“Jashae Noland, JaQuavis Snell and JayLan Streeter also posted big personal bests. KJ George got caught up in traffic at the start and had to put in a big last mile to work his way into second overall.”