Narendra Modi’s popularity has fallen during India’s deepening Covid crisis, according to an opinion poll, with the country reporting more than 400,000 new daily infections in a brutal second wave.

The prime minister’s approval ratings fell to 65 per cent on May 4, down from 74 per cent at the end of March, according to Morning Consult, the US data company — the lowest level since the agency began tracking Modi’s ratings in August 2019.

The Indian leader’s disapproval rating also rose to its highest level since the tracker was launched, increasing to 29 per cent from 20 per cent.

Modi’s approval ratings remain high compared to other global leaders but the country’s health and humanitarian crisis has taken a toll.

The prime minister has a strongman reputation but has been accused of indifference in the face of the Covid disaster, as he campaigned in state elections even as the crisis worsened.

“One of the things that Modi has really been good at is perception management. He’s always been very good at messaging,” said Ronojoy Sen, senior research fellow at the Institute of South Asian Studies in Singapore. “This is the first time I would say that his messaging has been awry.”

Modi’s government has sought to deflect blame for the calamity on to state governments and the public for failing to follow Covid protocols.

As deaths have risen, Harsh Vardhan, the health minister, has also cited official data to boast that India’s fatality ratio is lower than those of richer countries.

India reported a record 414,188 new Covid infections and 3,915 deaths on Thursday. There have been more than 234,083 confirmed deaths from the disease.

However, most experts believe the figures severely undercount the magnitude of the crisis because of a lack of testing, especially in small towns and rural areas.

“Right now, data is very corrupted,” Gautam Menon, a professor of biology at Ashoka University, told a recent seminar. “It’s good in some states and it’s very bad in other states.”

Many epidemiologists believe India’s latest outbreak is set to peak in the coming weeks and caseloads will gradually fall, partly helped by lockdowns implemented by some state governments.

The country’s vaccination campaign, however, is losing momentum, due to an acute shortage of jabs. The Modi government has been accused of failing to adequately plan its inoculation campaign. 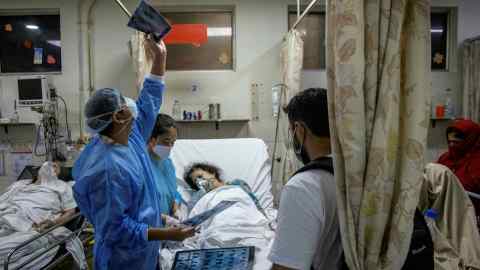 India administered 1.6m vaccines on Thursday and the seven-day moving average of daily vaccinations has fallen to 1.4m a day, down from a peak of 3.6m a day in mid-April.

Many Indians were incensed to see Modi boasting of the huge size of the crowds gathered for his recent election rallies in West Bengal state as the country struggled to access life-saving drugs, hospital beds, oxygen and vaccines.

The prime minister’s Bharatiya Janata Party lost its bid to seize power from the Trinamool Congress party in Sunday’s election despite Modi’s efforts.