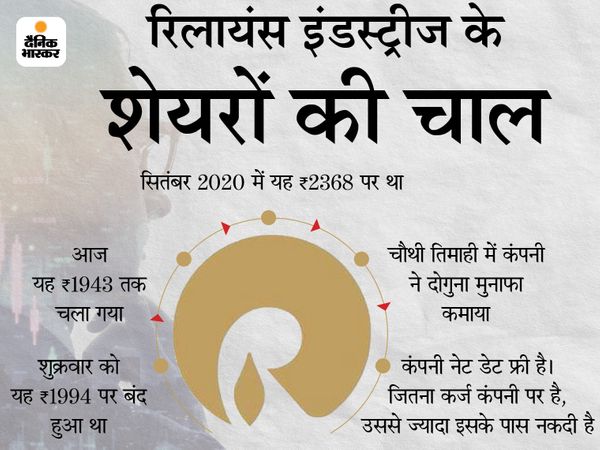 Reliance Industries Limited (RIL), the largest private sector company in the country, has a 3% drop today. It released fourth quarter results only on Friday. The result came after the market was closed. So today it was expected that the shares would see good growth, as there was a double increase in profits. But today there is a huge decline in its shares.

Shares opened at Rs 1963 this morning.

The stock of RIL opened at Rs 1,963 this morning. It closed at Rs 1,994 on Friday. Today it has fallen by almost 3% to Rs 1,943 by noon. From this it seems that the investors are not happy with its result. Some brokerage houses are now keeping the target of this stock below this.

14,995 crore profit in the fourth quarter

Talking about Reliance’s results, its net profit in the fourth quarter was Rs 14,995 crore. Which was 6,438 crores in January-March 2020. That is, there has been a double increase in profits compared to that. Talking about its income, it has been 1.54 lakh crore rupees, which is 11% higher than the previous year. Its other businesses including telecom to retail and media performed well. But the pressure on its shares is visible before the result and also after the result.

There was pressure on the shares before the result

Before the result, it had fallen by about one and a half percent on Friday. While on Thursday, it showed a decline. The company definitely declared a dividend of Rs 7 per share, but this did not go down well with the investors. There are many reasons for the decline in stocks. But the biggest reason is that the company did not perform as expected by analysts.

1.52 lakh crores was earned by selling stake in Jio

The company is debt-free and outperforming

Despite becoming debt free, raising Rs 2 lakh crore and performing well, its stock has been performing under pressure for the last 8-10 months. However, if seen during this period, the Bombay Stock Exchange, or the BSE Sensex, had performed well till March. The Sensex did decline in the month of April, but Reliance shares saw a much higher decline in the last 8-10 months.

The cat with more than 50,000 social media followers

Unicorn Fever – But Who Is Benefiting From Europe Startup Investment Boom?

Record rise in workers on payrolls in May