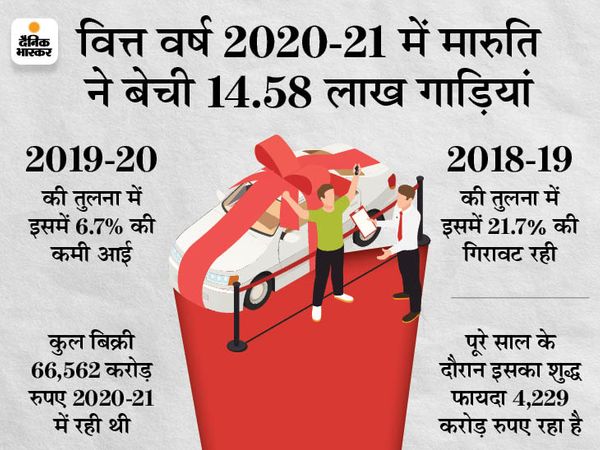 Maruti Suzuki, the country’s largest car maker, reported a net profit of Rs 1,166 crore in the fourth quarter. It has gained 9.7% less than the same time a year ago. This decrease occurred because his non-operating income has decreased. The company has paid a dividend of Rs 45 on every share to investors.

Dividend means giving investors some share of the earnings

The company released its result on Tuesday. Dividend refers to giving some money to investors from their earnings. The 45 rupees dividend announced by the company will come directly into the account of the investors. The company said that its total sales in January-March 2021 (fourth quarter) was Rs 22,958 crore. This is 33.6% higher than in 2020. The reason for the decrease in sales in 2020 was due to the Kovid-19, which at that time had a lockdown in March.

4.92 lakh vehicles sold in the quarter

The company said that its operating performance had improved. At the same time, capacity utilization has also improved. He reduced promotion expenses and increased sales prices. He also focused on reducing costs.

Talking about the entire financial year, it sold 14.58 lakh vehicles. This is 6.7% lower than a year ago. Whereas it is 21.7% less as compared to 2018-19. The impact of Kovid-19 was directly seen on the company’s sales during 2020-21. This was due to the lockdown caused by Kovid and the economic condition of the people was not correct. It has sold 13.61 lakh vehicles in the domestic market in 2020-21, while in the foreign countries it has sold 96 thousand 139 vehicles. Exports declined by 5.9%.