Lit Protocol has raised $2.2 million to build out its decentralized network that enables nonfungible tokens (NFTs) to act as access keys to exclusive content and experiences both online and in the real world.

David Sneider, cofounder at Lit Protocol, said in an interview with GamesBeat that the technology enables anyone to lock their data behind the equivalent of gated communities on the internet.

He said the company’s team of six is excited to work with a group of investors committed to  decentralization, tokenization, and stakeholder-owned systems — without the need to use centralized technology to protect their data.

Lit Protocol is ramping up with big plans for the future of the blockchain-based internet. Anyone
interested in using the protocol today can get started with “Apps” and “Offers” sections at LitGateway.com, where they can token gate files and documents.

Developers meanwhile can get started with the Lit Protocol software development kit, which is currently integrated with all EVM chains, including Ethereum, Polygon, and BSC and storage providers like Ceramic Network.

“Token gated access will be one of the most powerful applications of web3, and it’s just getting started,” said Stephen McKeon, partner at Collab+Currency, in a statement. “Tokens will be the keycards to the internet and the Lit Protocol infrastructure is designed to enable that vision.”

Lit Protocol plans to use the funds from this investment round to support developers, further decentralize the network, and partner with brands and teams to create novel blockchain. The founders run Lit Protocol as a San Francisco company, but they plan to convert it to a decentralized autonomous organization (DAO) in the future.

“This is more like a web utility,” said Sneider. “The Lit Protocol is a decentralized access control protocol. And what that means is that it’s a network of nodes that can independently validate some info on chain information, such as ownership of an NFT.”

Then those nodes can provision the user a key to access some content, whether it’s to decrypt something, or access some service. That’s a gateway that many can use. For instance, Shopify merchants could use it to enable NFTs to act as coupon discounts.

In the Gather.Town social space, users can token gate spaces — so that you need proof of NFT ownership to get inside a place. Or someone using Cloudflare could token gate livestreams and videos that are embedded within websites.

You could set conditions for unlocking, such as someone who owns more than three CryptoPunks can access this file. To unlock something, you send signed messages to each of the nodes for the blockchain, and each node creates a decryption share.  The network uses BLS threshold encryption. And then, kind of like a torrent, those decryption shares are sent to you, the user the in the client. You aggregate those shares above the threshold and then can reproduce the key to access the Zoom meeting or the file or whatever it might be, Sneider said.

You can used encrypted messages where only your own address can decrypt a message. The net result is that your data is sovereign. 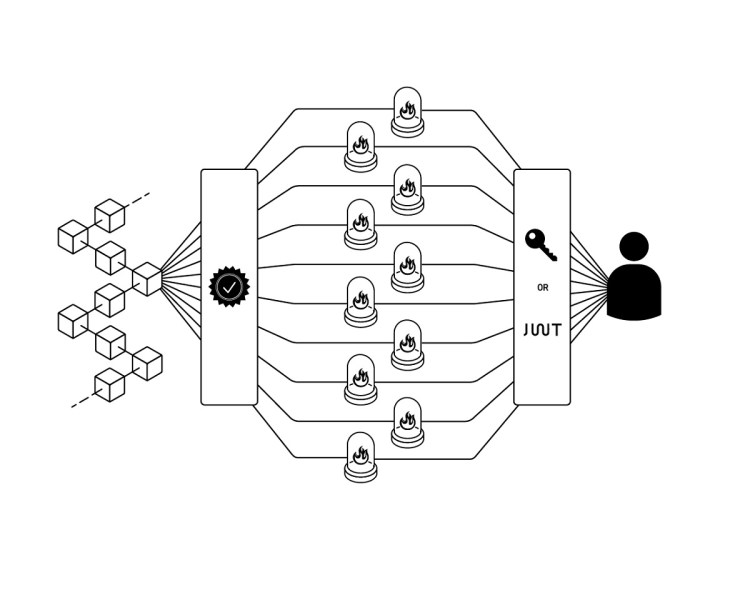 Above: The architecture behind Lit Protocol, where nodes provide partial keys to unlock a gate.

“We’re moving into a world where individual users have their own private space,” said Sneider. “That’s their data. And then they’re consenting to various individuals or applications or agents to access that data.”

That means you can own your data and decide what to do with it in the decentralized web, without having to rely on centralized authorities — like governments or big tech firms — to hold your data. Asked if this was something like crypto ticket sales, Sneider said this is an infrastructure layer, so the analogy is closer to a company like Mulesoft, a middleman that can connect a variety of disparate systems.

The protocol enables on chain conditions, such as NFTs, to act as keys to Web 2 and Web 3 experiences.

“The tools create gated communities and gated experiences, and protect your privacy as well,” Sneider said.

“Where it starts to get really interesting, where privacy comes important, is when you start trusting the system with money,” Sneider said.

The tech is an access control network and it works across all of the Ethereum virtual network (EVM) blockchains. It isn’t using a lot of computing power, Sneider said.

What can you lock away in it? Sneider calls it a resource, where you make use of a mechanism for using on chain data to access an off-chain resource.

“To me where it gets very interesting in the context of gaming,” he said. “There is a big dream around interoperable gaming around Web 3 that I’m sure you’re quite familiar with. But let’s say I create a model of the Eiffel Tower in some Web 3-enabled version of Minecraft. And then I want to sell that to you and you want to use that model in in your game, which is a separate environment.”

He added, “I could encrypt that model, like the 3d model stored on decentralized storage. The NFT represents the ownership. You buy the NF T and then by virtue of having the NFT, you’re then able to download that model and use it in your game. So this is like access control becomes kind of fundamental to interoperability in that context.”

There’s no limit to the amount of data that could be token gated because it’s up to the user to decide where they want data stored. Lit Protocol provides the access control layer in the stack. Also the user might not always be unlocking data. They could also be unlocking a perk, reward, content, metaverse experience, etc.

There are multiple parties in the network, there are nodes that provide the service, with different parties doing encrypting and decrypting. Whether this is legal or not in a particular country varies with each nation’s encryption laws and policies. It depends on the laws in a stakeholder’s role and their location.

Sneider thinks the tech could be disruptive to centralized companies that provide middleman services where they hold onto your data. That disruption will take time, but it’s possible, he said.

Sneider and Chris Cassano started the company. They met at Bitcoin meetups in San Francisco in 2014. Sneider was on the founding team at Sendbloom, a sales enablement service firm that was acquired by LinkedIn. Cassano is the inventor of the first Bitcoin hardware wallet and was formerly a senior engineer at 21.co/Earn.

Sneider said he was inspired by the dreams of early internet pioneers like Tim Berners Lee and Tim O’Reilly.

“This dream of data sovereignty has been around for 40 years, and it is really just starting to click into place,” he said.