Joe Biden is facing growing pressure from both flanks of the Democratic party as the US president negotiates his $2.3tn infrastructure package, between moderates who want him to strike a deal with Republicans and progressives who are urging him to walk away from the negotiating table.

The tug of war among Democrats on Capitol Hill could prove problematic for Biden because he may soon have to make a decision that satisfies one side of his political base, but disappoints the other on a core element of his economic agenda.

Biden had initially proposed an ambitious $2.3tn infrastructure package funded largely by an increase in the corporate tax rate — then last week, after several rounds of negotiations with Republicans, he lowered his target to $1.7tn. Republicans had initially proposed a $568bn plan, but have gradually raised their level of acceptable spending. On Thursday, Republican lawmakers led by Shelley Moore Capito of West Virginia put a new offer on the table worth just shy of $1tn.

Still, there is a big gap between the two sides — including the fact that Republicans are still averse to any tax increases to fund the plan, and have a much narrower view of what should be classified as infrastructure spending compared with the Democrats. Republican senators said on Thursday that their $928bn offer would be funded largely by repurposed Covid relief funds.

The White House did not immediately comment on the Republican senators’ offer.

Some Democrats, particularly on the progressive side, are urging Biden to ditch the negotiations with Republicans and move quickly towards passing the White House plan using their very slim majorities on Capitol Hill.

“I’m all for bipartisanship, but if Republicans aren’t serious partners, we must act without them,” Jeff Merkley, a Democratic senator from Oregon, said on Twitter this week. “We need clean energy, affordable broadband and housing, good roads and good jobs to be competitive in the 21st century.”

In a sign of the growing restlessness on the left, Merkley joined Bernie Sanders and Elizabeth Warren, fellow leftwing senators, in calling for Biden to move quickly on to the president’s other big economic agenda item — a $1.8tn social spending plan paid for with tax increases on the wealthy. “This human infrastructure cannot be secondary to the physical infrastructure needs or languish under Republican obstructionism,” they wrote.

The progressive Sunrise Movement responded to the latest Republican offer on Thursday by calling on Democrats to “use the power vested in them by voters to do what’s needed with or without the GOP”.

But the push from the left is being countered by continued efforts by moderate Democrats to strike a deal with Republicans.

Tom Carper, the Democratic senator from Delaware and a Biden ally, told reporters on Capitol Hill on Wednesday: “I think we might want to let this play out a little more . . . I am not particularly prepared to say how long, but a little more.”

“We have got a group of eight of us, four Democrats and four Republicans, that have come together on what we would spend on, and what the pay fors would be,” Romney said. “But we are on a second burner . . . the front burner is Shelley Moore Capito and the White House negotiation, and our work would only be of interest if that does not proceed.” 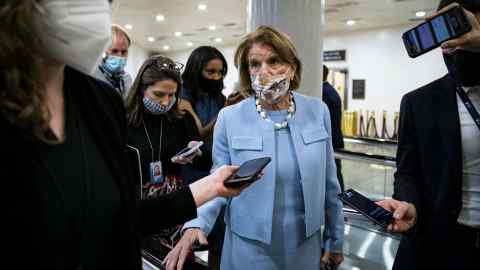 The president, who served in the upper chamber of Congress for more than three decades and campaigned on a record of reaching across the political aisle, has long said he wants to strike a bipartisan deal, rather than pushing through a tax-and-spend plan with only Democratic support using a Senate budget procedure called reconciliation.

But Biden and his team have also learnt tough lessons from Barack Obama’s presidency, when their signature healthcare reform law was stalled for weeks as they tried in vain to negotiate a deal with Republicans. Over the course of time, the plan grew less popular and resistance to it hardened on Capitol Hill and across the country.

Yet while patience is rapidly running out among progressive Democrats, moderates still appear comfortable with extended talks.

At a Financial Times event on Tuesday, Manchin said he wanted an “open and fair” process that included politicians from both parties — and suggested he was willing to wait months for that to play out, even into next year.

Meanwhile, Republicans said they were confident Manchin and other moderate Democrats were more likely to back their pared-back proposals than a larger infrastructure package.

“[The White House’s] challenge is obviously, how much they can do with 50 Democrats,” Roy Blunt, the Republican senator from Missouri, told reporters on Capitol Hill on Thursday. “My guess here is it is easier to get 15 or 20 or more Republicans . . . on a true infrastructure package than it could be to get the last three Democrats on a package that could include anything.”

Rana Foroohar and Edward Luce discuss the biggest themes at the intersection of money and power in US politics every Monday and Friday. Sign up for the newsletter here

Why AI Is A Powerful Tool For Coinnovation

4 Things All Successful (And Instantly Profitable) Websites Have In Common

The Most Common Project Blockers And Ways To Eliminate Them