Israel has vowed to step up its campaign against Palestinian militants Hamas in the Gaza Strip, after the two sides traded air strikes and rocket fire in a deadly overnight barrage that shook the Jewish state.

“We intend to make Hamas pay the price of the aggression against us — as you can see they haven’t quite got the message,” said the Israel army spokesman, Lieutenant Colonel Jonathan Conricus. “And we will continue to attack their military infrastructure . . . until they do get the message.”

In the worst violence since 2014, the Hamas militant group that runs the Gaza strip fired 1,000 rocket launches overnight that shuttered Israel’s only airport, lit up the sky over Tel Aviv and sent much of the Jewish state into bomb shelters. Israeli air strikes toppled high rise buildings in Gaza city and on Wednesday killed a squad of Hamas militants and senior commanders.

The furious volley of attacks has left 49 people dead in Gaza, six in Israel and prompted warnings that the two foes were edging to an all-out war. Hundreds are injured in the Gaza Strip and dozens in Israel, according to medics on both sides.

For now, the hostilities appear to have achieved their political ends for both Hamas and Prime Minister Benjamin Netanyahu, analysts said. Hamas has displayed its ability to strike deep into Israeli territory, as far south as Beersheva and as far inland as the Ben Gurion International Airport.

“Hamas wanted to show Israel that the Palestinian resistance is a lot more sophisticated — and in the last 48 hours, it fired hundreds of [rockets] at Israel at the same time,” said Mkhaimar Abusada, a professor of politics at Al-Azhar University in Gaza. “Millions of Israelis were in shelters, Ben Gurion airport was closed, and look at the state of uprising against Israel in the Arab Israelis.”

And Netanyahu, who was on the cusp of losing his premiership, has reasserted himself as ‘Mr Security’, his nickname in Israeli media. Plans to build a coalition to oust him, which required an Islamist party to back a rightwing prime minister, have now formally been suspended.

The Israeli military’s aggressive new chief of staff, Aviv Kochavi, last year outlined a “Victory Doctrine” — destroying the largest amount of enemy capabilities as rapidly as possible, with the lowest number of casualties.

“Between operations, the Israeli army works very hard to build up a very large bank of military targets that it can attack. The idea is to hit Hamas to such an extent that the next time before they use such force, they will think twice,” said Amir Avivi, a retired brigadier general who has worked with a previous army chief. “We want to recreate this deterrence that has been lost over time.”

Kochavi was given the green light on Tuesday evening by Netanyahu to step up the intensity of attacks. Overnight, the Israeli Air Force targeted senior Hamas commanders, carried out an 80-aircraft sortie that simultaneously targeted 150 rocket launch sites and in two instances, toppled high rise buildings that the IDF said was being used by Hamas.

Ghassan Abu el-Said, who lived next to one, said the buildings’ security guard had received repeated phone calls from the Israeli military to evacuate everybody. He described half-dressed families, a person in a wheelchair and elderly people rushing down the street to get to safety.

Two hours later, the building was destroyed — prompting a furious barrage from Hamas into Israel. “This is collective punishment against civilians — so many are now homeless,” he said. “The Israeli occupation is meant to terrify us, and to cause destruction.”

This bout of warfare between Hamas and Israel was preceded by days of hostilities between Israeli police and Muslim protesters at al-Aqsa mosque in Jerusalem, a flashpoint between rightwing Jews and devout Muslims who both cherish the site it is built on.

Hundreds of Muslim protesters had been injured over the weekend by Israeli police, who cleared the mosque with tear gas, stun grenades and rubber bullets, and the Islamist Hamas, which styles itself as the protector of the shrine, stepped in.

“Hamas did this to save al-Aqsa from the Zionists — no price is too high to save our holy mosque,” said Zayed, a 19-year old at a hospital in Gaza, tending to his friend’s injuries from a broken window near an Israeli air strike. “What else can we do when we see the Jews violating our Palestinian brothers.”

In a sign of spreading unrest, thousands of Israeli Arabs turned out en masse for protests in the Arab dominated north of the country. One Jewish mayor called it an “intifada” or uprising.

In Lod, a mixed town of Muslims and Jews, police called for reinforcements late Tuesday, as protesters burnt cars and a synagogue after the funeral of an Arab man killed by a Jewish resident.

“The sight of the pogrom in Lod and the disturbances across the country by an incited and bloodthirsty Arab mob, injuring people and even attacking sacred Jewish spaces is unforgivable,” said Israeli president Reuven Rivlin. 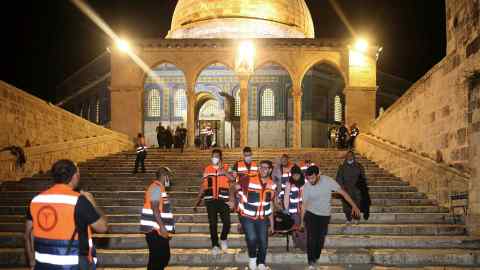 Israel faces growing international pressure to show restraint, and its western allies condemned Hamas for its indiscriminate rocket fire targeting civilians. Egypt, which has mediated between Israel and Hamas in previous conflicts, was sending two teams to help broker a ceasefire, according to an Israeli official.

The UN Security Council scheduled a second emergency session on the crisis. US President Joe Biden directed national security adviser Jake Sullivan and secretary of state Antony Blinken to reach out to their Israeli counterparts, according to Reuters.