When the United Arab Emirates shocked the Arab world by normalising relations with Israel it said the move would help ease the protracted Arab-Israeli conflict. But nine months later, the wealthy Gulf state finds itself in a difficult position as its newest ally bombards the impoverished Palestinian territory of Gaza.

Israeli war planes and artillery have been pounding Gaza while Hamas, the group that controls the territory, has fired rockets into Israel. On Sunday morning, death toll in Gaza stood at 181, including 83 women and children, local health officials said.

Ten people have died inside Israel, including two children, local medics have said.

While almost a third of Arab countries now have relations with Israel, this week’s bloodshed shows that diplomatic ties ushered in by last year’s so-called Abraham Accords have given them little leverage and done nothing to ease the root cause of the protracted crisis — the Jewish state’s conflict with the Palestinians.

“They [the UAE] are clearly in a very difficult position. On one hand, the UAE’s interests with Israel are long term and strategic, so ideally their relations should be resilient to shocks,” said Cinzia Bianco, a visiting fellow at the European Council on Foreign Relations. “At the same time, the UAE obviously claimed that the Abraham Accords would give them leverage to also support the Palestinians and rein in Israel’s aggressions against them.”

So far, Israel has rejected all international efforts pushing for a ceasefire. But Bianco said Abu Dhabi could still deploy diplomatic leverage to pressure the Jewish state to limit the scale of its retaliation. Such intervention, however, could jeopardise progress on joint projects of strategic value to the UAE, she added.

Recent collaborations include plans for Emirati and Israeli defence manufacturers to develop a system to counter drones.

The normalisation of relations between Israel and the UAE under the Abraham Accords was quickly followed by similar moves from Bahrain, Sudan and Morocco, that marked a radical departure from the established Arab stance towards the Jewish state.

The Arab position before the accords was that they would recognise Israel only if there was a just settlement with the Palestinians that led to the creation of a viable Palestinian state. The transactional deals brokered by the Trump administration, which pursued an overtly pro-Israel stance, left the Palestinians feeling isolated and betrayed. Critics said Arab states had given up a bargaining tool and gained little in return, warning the moves would be exploited by more militant Palestinian factions.

Like other members of the Arab League, the UAE endorsed an appeal on Tuesday to the International Criminal Court to “investigate war crimes and crimes against humanity” committed by Israel against the Palestinians.

“The UAE stands with the rights of Palestinians, for the end of the Israeli occupation and with a two-state solution with an independent Palestinian state with East Jerusalem as its capital,” said Anwar Gargash, diplomatic adviser to the UAE president, this week. “This is a historic and principled position that does not budge.”

The UAE foreign ministry was last month quick to condemn Israeli plans to evict Palestinians from their homes on land claimed by Israeli settlers. And when clashes broke out between armed Israeli police and rock-throwing Palestinian youths, the UAE urged Israeli authorities to reduce tensions.

The UAE’s clear public stance has given cover for Emiratis and residents in the autocratic state to condemn Israeli actions and express support for the Palestinians, after any local anger at the earlier decision to normalise relations was suppressed at the time. Apart from a fringe of Emirati online activists who have sided with Israel, most social media reaction — even from some ministers — has been pro-Palestinian.

“Standardization [of relations] is irreversible but it is very difficult to defend and even talk about in these circumstances,” said Abdulkhaleq Abdulla, a Dubai-based political science professor.

After the UAE signed its accord, there was speculation about whether Saudi Arabia, Israel’s main prize, would follow suit. Like Abu Dhabi, Riyadh has been covertly co-operating with Israel on intelligence and security matters as they share the goal of countering Iran. 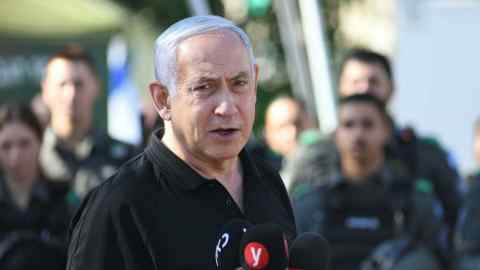 But this week’s Israeli assault on Gaza makes that appear ever more remote. Saudi foreign minister Prince Faisal bin Farhan on Sunday said the kingdom “categorically rejects the Israeli violations against Palestinians”, while calling for an immediate ceasefire.

In Morocco, which established relations with the Jewish state in October in return for US recognition of Moroccan sovereignty over the disputed territory of Western Sahara, the foreign ministry said it was watching events “with deep concern”.

In 2014, during the last major war between Israel and Hamas, thousands of protesters, including government ministers, took to the streets across Rabat, the capital. This time Moroccan police dispersed a small pro-Palestinian protest in the city this week. The newly formed Morocco-Israel Business Council was also reported to have postponed a virtual meeting aimed at encouraging Moroccan investment in Israel.

Public sentiment in the Arab world remained strongly pro-Palestinian, said HA Hellyer, senior associate fellow at the Carnegie Endowment for International Peace. “The absence of protests isn’t an absence of the desire to protest but an absence of permission to protest.”

Restrictions on freedom of speech across the region made it harder to gauge the extent of public anger, Hellyer said, but social media and the extensive coverage on mainstream television showed the “Palestinian question” was still close to Arabs’ hearts.

“Almost half of the messages I received on Thursday for the religious festival marking the end of Ramadan, show pictures of the Dome of the Rock in Jerusalem,” he added.

The builders with the secret to work-life balance

Carpet senses human poses for 3D models and other news