After rolling them out to selected creators over the past year, Instagram has now announced that its live-stream Badges, which enable viewers to make donations to creators, will be enabled by default for all streams in all regions where they’re available.

“From today, if you’re eligible to use Badges, and they’re available in your country, they will now be automatically enabled for all lives so you can seamlessly begin monetizing.”

The update will see more creators eligible to generate money from their IG Live efforts, which could encourage them to broadcast more often, in order to generate more engagement, and revenue from their fans.

IG Live badges appear alongside comments when the commenter has paid to add ‘extra flair’ to their contribution. 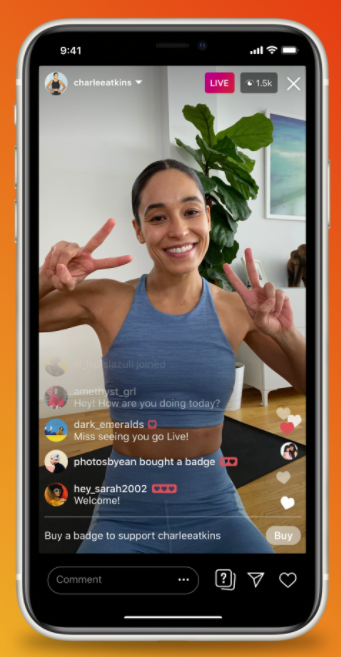 Users are able to purchase badges during a live-stream by tapping the badges icon in the lower function bar, with prices ranging from $0.99 for one heart, to $4.99 for three.

Any revenue generated from badges applied in a stream goes back to the creator (minus any fees), providing a means to both offer direct financial support to your favorite streamers in the app, while also giving viewers a way to highlight their comments, which could then give the streamer more reason to acknowledge them and interact.

In order to get access to IG Live badges, creators need to be aged over 18, and have a Creator or Business account in the app. They also need to have over 10k followers, and they need to be compliant with the platform’s various partner monetization policies and community guidelines.

IG Live badges are currently available to creators in the US, the UK, France, Spain, Italy, Germany, Japan, Australia, Turkey, Brazil and Mexico. And now, when creators in these regions go live, they’ll be switched on automatically – though you can also switch badges off if you’d prefer not to enact them on your broadcasts.

It’s the latest in Instagram’s expanding effort to provide more monetization potential to creators, in order to keep them posting more often, and keep their audiences coming back to the app. IG is now in a battle with every other platform to retain top talent, and as we’ve seen over time, eventually, big-name stars will shift to the platforms that offer them the biggest revenue potential, which could, eventually, be a key growth element for each app.

The issue came up once again this week, with Twitch stars threatening to leave the app unless it reforms its payment models, with YouTube and Meta now offering better incentives in their game-streaming programs. That’s the same issue that eventually saw the demise of Vine, which, given the success of TikTok, was clearly never about the app’s functionality or offering. Vine stars wanted more money for the audiences that they brought in with their content, which parent company Twitter couldn’t provide. Those creators eventually migrated to other platforms, and Vine died out, becoming a cautionary tale for other platforms.

Creator monetization has become a bigger battleground with the arrival of TikTok, with YouTube and Meta looking to utilize their scale and resources to muscle out their rising competitor. That’s subsequently raised the stakes for all platforms, and it’ll be interesting to see how sustainable the current creator payment programs are, and whether the big players do indeed end up winning out as a result.

TikTok is still working on its monetization models, and both the incumbent leaders can offer more potential on this front. Will that reach a key tipping point for TikTok, or will it be able to continue evolving its tools in line with overall growth?

Clearly, Instagram is working to up its game to further squeeze TikTok on this front.