India’s foreign minister is self-isolating after two members of the country’s delegation to G7 meetings in London tested positive for coronavirus.

Subrahmanyam Jaishankar, India’s external affairs minister, said that he was informed that he had been exposed to a possible Covid-19 case.

Jaishankar held a socially distanced meeting with UK home secretary Priti Patel on Tuesday, where the two agreed on a “migration and mobility deal”, which will provide a “bespoke route” for young professionals from India seeking to live and work in the UK. He also met Antony Blinken, the US secretary of state, earlier this week.

Members of the Indian delegation had not yet attended G7 meetings in Lancaster House, London, where talks took place on Tuesday and continued on Wednesday.

The meetings were the first face-to-face gatherings of the group’s foreign ministers in more than two years. Representatives from Australia and India are attending some of the sessions alongside the G7 advanced economies as the UK seeks to strengthen its ties within the Indo-Pacific region.

Coronavirus measures have been in place throughout the meetings including an on-site testing facility, social distancing, mask wearing and Perspex screens, aimed at separating delegates in meetings.

UK prime minister Boris Johnson defended the decision to hold the G7 meetings in person, arguing that it was important for the government “to try to continue as much business” as possible despite the pandemic.

“We have a very important relationship with India and with our G7 partners”, he said while campaigning ahead of Thursday’s local elections. “As I understand it, what has happened is the individuals concerned are all isolating now,” he said, adding that he would have a meeting with Jaishankar on Wednesday afternoon via Zoom.

Officials believe that, based on discussions with Public Health England, people who attended meetings with Jaishankar have a low risk of contracting the virus, as coronavirus restrictions were in place, and as a result will not need to self-isolate.

The G7 meetings, led by UK foreign secretary Dominic Raab, have centred on geopolitical issues such as climate change, vaccines and threats to democracy and come as the UK hopes to establish its Global Britain agenda and post-Brexit foreign policy aims.

“As a measure of abundant caution and also out of consideration for others, I decided to conduct my engagements in the virtual mode,” Jaishankar wrote on Twitter. Officials said the rest of the small Indian delegation would also self-isolate for the remainder of the G7 meetings.

“We deeply regret that foreign minister Jaishankar will be unable to attend the meeting today in person,” a senior UK diplomat said. “[He] will now attend virtually, but this is exactly why we have put in place strict Covid protocols and daily testing.” 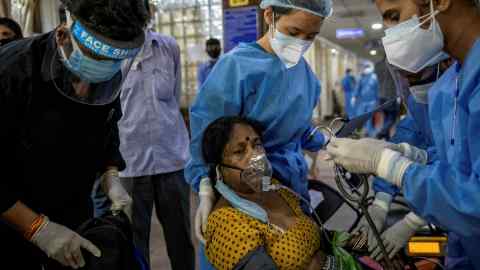 The positive test comes as India contends with a ferocious Covid-19 second wave that has overwhelmed the country’s healthcare system and left many critically ailing patients struggling to access medical care.

India confirmed almost 383,000 new infections on Tuesday, down slightly from a peak of more than 400,000 new cases on Friday, but testing has dropped sharply from a peak of 1.9m per day last week to just 1.5m.

More than 3,700 Indian are known to have died from Covid on Tuesday, pushing the country’s overall toll since the start of the pandemic to more than 226,000.

But the figures for both confirmed new cases and casualties are believed to be dramatic undercounts, given the paucity of testing, while many people in India’s rural heartland are dying from respiratory distress and other classic Covid symptoms.

Supplies such as oxygen generators and life-saving drugs are pouring into India from overseas, as the international community seeks to help combat the deepening humanitarian crisis. However, many have complained of the slow pace of aid distribution.