HP has managed to make a name for itself by crafting attractive, unique laptops. Its Spectre notebooks are some of the prettiest PCs around, while the original Spectre Folio was a head-turning mix of leather and metal. The company continues to chase superlatives like “thinnest” or “lightest” with its Elite Dragonfly series, but it’s also bringing eye-catching features across its portfolio. The HP Elite Folio is a real hodgepodge of those ideas — it has a leather build, a pull-forward touchscreen, Snapdragon 8cx power, LTE connectivity and a stylus with Wacom technology. On paper, this is a compelling mix of features. But at a whopping $1,889, the Elite Folio is hideously expensive for a Windows on ARM machine. 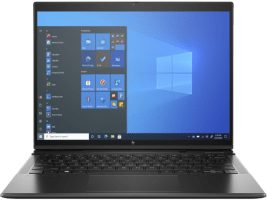 One of HP’s greatest strengths is its unique and attractive designs. In a sea of metallic rounded rectangles, the Elite Folio certainly stands out. Its vegan leather-covered exterior is tasteful and soft to the touch. Carrying it around almost made me feel professional.

Opening the Elite Folio is a bit tricky, though. Because it has a pull-forward screen, sometimes the panel pops out of the lid when I’m just trying to open it into laptop mode. This happens about 50 percent of the time — I wish there were a lock to keep the screen in place when I don’t want it to slide forward.

When the laptop is all set up though, everything works as it should. The hinge is sturdy enough to hold the screen at any angle, and the little slot between the display and keyboard that houses and charges the included HP Slim Active Pen is convenient. This little slot, by the way, is also where you’ll find the SIM card tray — it’s tucked away under the right end. Honestly, it’s a little hard to find if you don’t know where to look: I had to ask HP where my SIM card should go.

Speakers flank the keyboard and a USB-C port sits on each side of the machine, with a headphone jack on the right. While there isn’t a fingerprint sensor for logins, you can use face recognition via the 720p infrared hybrid webcam. I also appreciate the mechanical privacy shutter here, though I wish the top bezel were a little slimmer.

The thick top bezel makes the Elite Folio’s 3:2 panel look extra tall, though that could just be my eyes adjusting after spending most of my time on a 16:9 system. It’s worth noting that the Surface Laptop 4 has the same aspect ratio but its bezels are slightly thinner.

Chunky borders aren’t that big of a deal (plus it makes it easier to pop the screen out without accidentally launching an app). I’m more bothered by the display itself. While I like the taller aspect ratio and the 1920 x 1280 resolution makes images and text look crisp on the 13.5-inch panel, I struggled to see most things under sunlight. I’ve spent most of last year using the Samsung Galaxy Book Flex as my main driver, and compared to its QLED display, the Elite Folio’s LCD looks uneven and dim.

On the other hand, HP’s audio setup here is surprisingly strong. The speakers are loud and clear. I’d prefer a heavier bass and clearer mids on songs like Doja Cat’s Need To Know and Maroon 5’s Lost, but the sound quality was better than many other laptops.

Another advantage the Elite Folio has over most ultraportables at this size is its keyboard. HP offers buttons with 1.3mm of travel, which is one of the deepest setups I’ve tested. The layout is well-spaced, too, and there are no undersized keys here. The adjustable backlighting is nice as well. I found the buttons require a bit too much force to depress, but that’s something I could see myself getting used to over time.

The trackpad is fine too. It’s responsive, amply sized, and multi-finger gestures work well. Nothing super surprising or unique, but also nothing to complain about. I do have a bone to pick with the webcam, though. While I did like the convenience of logging in biometrically via the Elite Folio’s 720p camera, I hated the way it made me look on video calls. Images were dark and splotchy and I looked like one of the ghosts hidden in the background of The Haunting of Hill House.

Something else HP offers that companies like Microsoft and Lenovo don’t (and Samsung has done away with on its latest laptops) is a slot for the included stylus. That, and the Elite Folio’s pull-forward screen make it easier to do things like draw sketches or take notes. You can do so with the display propped up in front of the keyboard or push it down so it lays flat like a tablet.

In all these configurations, the Elite Folio performed well, and I found palm rejection effective as I scrawled some handwritten ramblings into Paint. HP’s Elite Slim Active Pen uses Wacom technology, detects 4,096 levels of pressure, and offers tilt sensitivity as well. It was responsive and smooth as I drew a terrible rendering of the beach (my fault, not the pen’s). When I was ready to go back to laptop mode, I appreciated the little nub on the screen’s bottom edge that helps with pushing it back up. The display also rotated between portrait and landscape orientations quickly amid these transitions.

I wish I could say the same about the Elite Folio’s overall performance. It uses Qualcomm’s Snapdragon 8cx Gen 2 with 16GB of RAM and, like most Windows on ARM machines we’ve tested, is stuttery. When I switched back and forth between writing this review and checking my Slack pings, it would take a few seconds for the web app to load and show all my messages.

I use the same browser-based setup of Slack on my daily driver (an Intel-powered PC) and rarely encounter such delays. Of course, it’s possible that Slack is partially to blame, but I also experienced similar lags while setting the Elite Folio up. Benchmarks and my usual suite of apps took noticeably longer to install than on most other systems.

Benchmarks aren’t a perfect representation of performance, but they still tell us how the Elite Folio stacks up against similar machines. On Geekbench 5, the Elite Folio scores were less than half that of an M1-powered MacBook Air or Pro, and also lost to Intel systems like the Samsung Galaxy Book Pro 360. It did fare slightly better than a Core i3-powered Acer Aspire 5, but that costs about a third of the price.

I don’t want to keep beating a dead horse so instead of ranting once more about the limited app compatibility and glitchy emulator software of Windows on ARM, I’ll just say this: Apple has proven it’s possible to make ARM-based laptops that run extremely well — Microsoft seriously needs to step up its game.

One of the main things Snapdragon laptops have going for them is their incredible battery life and speedy cellular connections. HP promises up to 20 hours of video playback on a charge, but the Elite Folio actually conked out after 15 hours and 14 minutes on our rundown test. At a lower screen brightness, the machine could potentially meet HP’s estimated mark. That said, the Elite Folio’s runtime already beats most ultraportables we’ve tested, like the MacBook Air 2020 and HP’s own Elite Dragonfly and Elitebook x360. But it fell minutes short of the Surface Laptop 4 (15-inch) and Galaxy Book Pro 360 (15-inch).

Another thing I like about Snapdragon PCs are their reliable LTE connections. The Elite Folio supports gigabit LTE, and you can get a model with 5G too, though only sub-6 and not mmWave. Rounding out the high speed wireless options is WiFi 6.

There’s a lot to like about the Elite Folio — its unique design, handy stylus, good battery life and cellular connectivity are great. But I cannot, in good conscience, tell you to shell out $1,889 for a Windows on ARM machine until Microsoft improves the system. Sure, HP isn’t exactly targeting the average consumer since this falls under its “Elite” line of commercial notebooks but in this case that mostly just means the Folio has IT deployment friendly software and security. It’s still too much money for a laptop that starts out with a messy OS, and the Elite Folio doesn’t do enough to overcome that disadvantage.