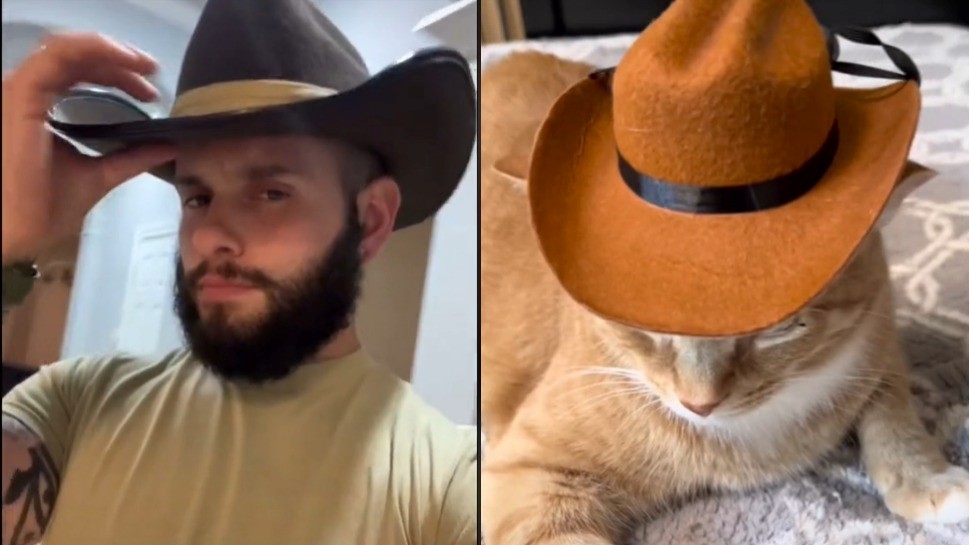 It’s the most Texas love story ever. A Houston man is going viral for his TikToks dedicated to his beloved pet cats. One of the most popular TikToks by “Cat Dadd,” whose real name is Andrew Villarreal, captures just how close the 26-year-old is to one of his feline friends named Sebby.

The short clip, posted over the weekend, has amassed nearly two million views and over 477,000 likes. Among the over 2,500 comments, one user wrote: “Omg orange cat w/ orange hat,” to which Villarreal responded: “Can’t get any better than that right?”

The TikTok also garnered the attention of pet supply retailer Chewy and bookseller Barnes & Noble, the latter of which commented: “This is the content we need. Thank you for your service.”

Some of Villarreal’s other popular recent clips show a costumed Sebby taking part in rock band Pierce the Veil’s TikTok challenge. Another shows the orange tabby wearing his full cowboy costume. Villarreal frequently documents living under the same roof with Sebby and his five other cats Chloe, Abby, Maggie, Tuxie and Zeus.

While you likely couldn’t guess from the clip, Sebby has recently undergone a significant health transformation. Villarreal explains that he first began his TikTok account last year to document his kitten’s weight-loss journey. “He really needed help losing weight so I wanted to show people that it was possible for a cat to achieve such a thing.” Villarreal said.

However, Villarreal said he eventually expanded his content, making funny skits and videos that people could relate to about cats to “show the world my love for my pets,” adding “whether it be crazy things that cats do or even how loving and affectionate they can be.”

As seen in the cowboy hat video, Villarreal often uses costumes, toys and props to make his TikToks stand out. And it’s been a tremendous success so far, with Villarreal amassing 160,000 followers and 14 million likes on the platform to date (Sebby has also lost 12 pounds so far). He also has an Instagram account with almost 12,000 people following him.

Villarreal’s first viral moment occurred back in April 2021 when he posted a video about his cats using the litter box immediately after he finished scooping it clean. “‘Going’ in a clean environment makes life better for a cat,” he said. That TikTok was watched 2.3 million times. However, Villarreal’s most viral video to date is a TikTok from August 2021, which drew more than 6.1 million views. The footage shows Villarreal and Sebby reenact the popular “Muffin Man” scene from the 2001 Dreamworks film “Shrek.”

Villarreal says Sebby has grown a huge fan base thanks to the videos, and he plans to continue making clips of starring his feline friend for as long as possible. “That’s what I try to do,” Villareal said. “It’s hard to stay positive during these times and it’s easy to see funny videos or relatable content at the end of the day to get a smile.”