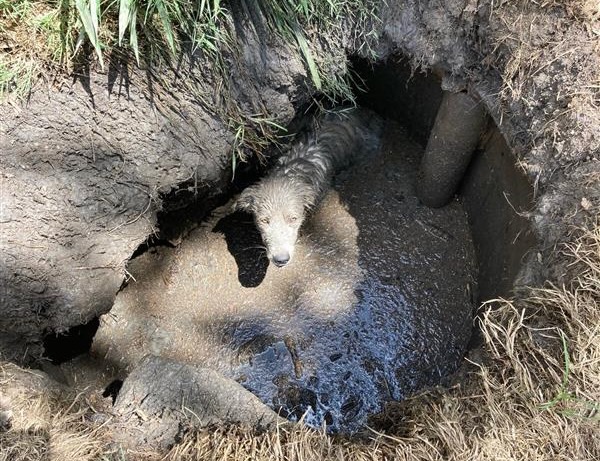 An eight-month-old puppy stuck in a mud-filled sinkhole in Southwest Houston was rescued on Tuesday by the local SPCA, according to a report by KHOU’s Chloe Alexander.

A good Samaritan called the Houston SPCA after spotting the baby Great Pyrenees trying to escape the sinkhole’s sticky clutches off Regg Drive near Sims Bayou, close to James Madison High School. An animal rescue ambulance was sent to extract the trapped animal and it was soon discovered the pup had sustained a severe leg injury. The veterinary experts at the Houston SPCA Animal Medical Center cleaned up the dog and treated it for its leg injury.

Injured animal rescue ambulance en route to campus with Great Pyrenees with injured leg that had been trapped in a hole. #rescuedog pic.twitter.com/2HLqC549v0

The Houston SPCA hopes to return the Great Pyrenees puppy to its original owner in the next few days. However, if it’s not claimed soon, the pup will be put up for adoption. Presumptive owners will have to provide proof of ownership before taking the dog home with them, the nonprofit told KHOU.

The Houston SPCA encourages Houstonians to call 713-880-4357 if they see an animal or unattended pet in distress.

Houston has actually been facing a stray and unadopted dog problem for years. According to BARC, the city’s pet animal shelter, there were over 1 million stray dogs before Hurricane Harvey first swept through the city in 2017. The hurricane made the problem worse as thousands of dogs were separated from their owners and rescued from the floodwaters during cleanup and rescue operations.