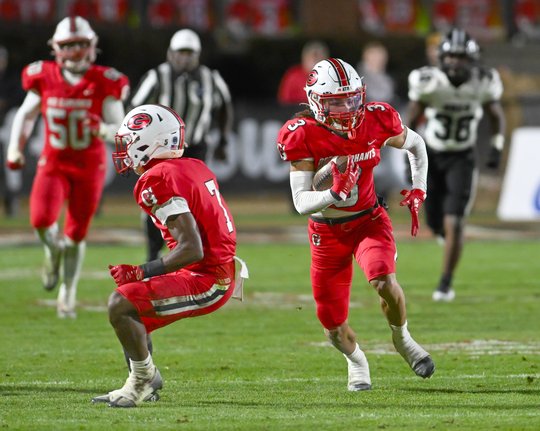 Hill wasn’t going to make it easy for them, as the Bears’ (10-3) signal caller put up 421 yards and four TDs on 26-of-40 passing and kept the Red Elephants on their toes all night with an up-tempo, no-huddle approach.

But the defense did made just enough plays by bringing pressure, including six sacks of Hill worth 20 yard in losses, two by Jeremiah Telander, and a fumble recovery by Dre Raven, to keep the Gainesville offense at least one step ahead most of the night.

“First of all, for us to be here and now going to the semifinals, God’s been good to us,” Gainesville coach Josh Niblett said. “I can’t say enough about these kids. We  can talk about the game all we want to, but it’s about our kids being resilient, believing in the plan. We talked all week about their tempo, and no matter what happens in a play, you’ve got to get lined up because … they’ll hit you with another (big play). Look, you can have a bad play, but you can’t have a bad day.

“You’ve got to pick and choose your moments to put pressure on them, get (Hill) off his spot, make him get the ball out a little quicker and try to exploit them as far as their protection goes. … It’s all about get lined up, get it tackled up and keep the ball in front.”

Big plays were a big part of the first half, especially for Gainesville.

The Red Elephants broke off five different plays of 23 yards or more, with two of them coming from Cheeks, including one on a key third-down play on Gainesville’s first possession of the game from its own 35.

The 5-foot-10, 180-pound senior snuck in behind the Houston County secondary on a wheel route, and Wright hit him in stride down the right sideline for a 65-yard touchdown that put the Red Elephants up 7-0 just 4:11 after the opening kickoff.

“We had to outwork them,” said Cheeks, who finished with 135 yards and two touchdowns on the ground and three catches for 101 yards and a score through the air. “They’re not used to working as hard as we do.”

Meanwhile, the Gainesville defense did get beat for a few big plays as well, including a 51-yard completion from Hill to Kale Woodburn on the third play of the game.

But the Red Elephants put plenty of pressure on the 6-5, 220-pound sophomore, sacking him five times in the first half alone, including once on fourth and 2 from the Gainesville 24 on the first drive of the game.

However, Hill and Houston County took advantage of two short-field situations in the second quarter – on an unsportsmanlike penalty following a punt to take over at the Gainesville 35 and another following a short punt that set the Bears up at 32.

Hill cashed both in on the first snap after the punts, first hitting Woodburn on a 35-yard scoring strike with 10:11 left in the half, and then connecting with Arthur Brown from 32 yards out to vault the Bears in to a 14-7 lead with 8:13 left in the half. Woodburn finished the game with nine catches for 177 yards and three TDs.

But Gainesville responded quickly with a little lightning of its own, beginning with Cheeks’ second big play of the half on the third play of the ensuing possession.

This time, he found some room up the middle, broke loose after an attempted leg tackle and bolted 41 yards for a score that pulled the Red Elephants even at 14-all at the 7:05 mark of the second quarter.

Another big sack by Telander forced a punt on Houston County’s next possession gave Gainesville the ball back, and Wright came up with another huge play on third and 14 just inside midfield.

The junior quarterback took off after being pressured in the pocket and not only picked up the first down, but also made a move to find the right sideline and picked up two blocks for a 45-yard TD on a scramble to put the Red Elephants back in front at 21-14 with 2:17 left in the half.

A three-and-out later, and Gainesville had another shot to score before the half, which Wright did four plays later by hitting Sky Niblett on a 17-yard scoring strike with 51.8 seconds left to send the Red Elephants into intermission with a 28-14 lead.

Cheeks and Reece then really helped give Gainesville quick breathing room coming out of the locker room, with the former taking the first snap of the third quarter 65 yards around the left end for a score, and the latter grabbing a slant pass from Baxter and splitting the secondary for a 55-yard TD that made the lead 42-14 by the 7:01 mark of the third quarter.

Reece then answered Hill’s 39-yard scoring strike to Woodburn with 4:59 left in the half by taking the ensuing kickoff along the left sideline on his own 5-yard line bursting toward the middle of the field and making a final cut to his right to pick up blockers for a 95-yard score to give the Red Elephants their four-TD lead back at 49-21 with 4:43 left in the period.

“After the touchdown they got, everyone was kind of getting worried,” said Reece, who also finished with seven catches for 108 yards. “So I just did what a playmaker does and come back and make a play. The coaches said just take it up the hash, and they were going to wide, and it just played out exactly how it did in practice.”

Gainesville would need all of that cushion as Hill drove Houston County down the field to set up Nick Jordan’s 1-yard TD dive with 11.4 seconds left in the quarter, and then hooked up with Woodburn for the third time for a score on the night, this time from 16 yards out, to pull the Bears to within 49-35 with 8:36 remaining.

But a couple of key first downs, one on a penalty and one on Wright’s 36-yard completion to Sky Niblett with just over two minutes left, allowed the Red Elephants to run some clock.

And as exhausted as the defense was, it was able to keep Hill and Houston County out of the end zone on their last gasp drive to close out the win.

“I think (fatigue was a factor) a little bit,” Telander said. “But we’ve practice hard and worked on conditioning since January.”