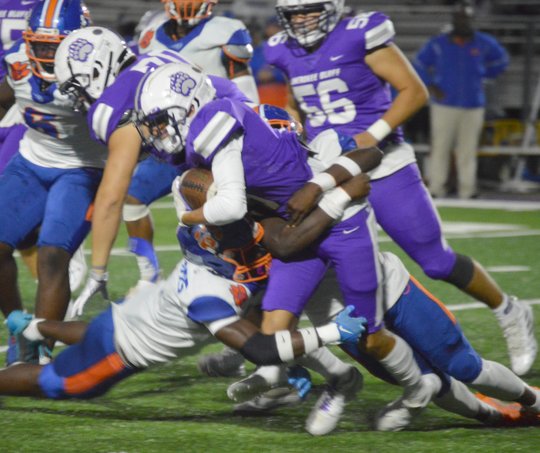 This week, the task is a little bit tougher with a matchup against second-year East Forsyth (4-1, 2-1) at Half-Mile Stadium, which in the Forsyth County portion of Gainesville.

“I have a ton of respect for coach (Brian) Allison and what their program is doing at East Forsyth,” said Jones, who was an offensive lineman at Furman University, while Allison was its defensive line coach in the 1990s. “The biggest thing that jumps off the film about (East Forsyth) is that they have no glaring weaknesses.”

For the Broncos, the number that jumps off the page is the 24 points its defensive has allowed all season.

However, Cherokee Bluff’s coach believes his still-young, but rapidly-maturing defense is up for the challenge.

For the Bears, Connor Griffin, a sophomore middle linebacker, is leading the way with 66 tackles this season.

His biggest play, according to Jones, was a touchdown-saving stop of a screen pass near the goal line.

“Connor’s got a knack for making plays and has great vision,” Jones said.

Griffin also had 16 stops against Madison County, a 20-19 win for the Bears in the region opener.

Also for Cherokee Bluff, Carter Daum has really stood out, having registered 59 tackles to this point in the season.

“As the season goes also, when you’re young, you’ll see improvement,” Jones said. “(Defensive coordinator) Chris Griffin and his staff have done a tremendous job. As the year has gone on, our guys played more disciplined and with great effort.”

Defensively, Cherokee Bluff will be tasked with stopping a highly-efficient and balanced Broncos offense.

East Forsyth is led by quarterback Brock Szakacz, who’s thrown for 454 yards and a pair of scores. Its running game is anchored by senior Brandon Peoples, who stands at 643 yards and six touchdowns.

Cherokee Bluff has found success moving the ball, primarily behind a pair of running backs Perry Haynes (397 yards, four touchdowns) and Jaylon Carroll (319 yards, three touchdowns), and quarterback Asher Wilson who is at 900 yards through the air in 2022.

However, to be successful, the Bears will have to cut down on the turnovers.

Last week, four turnovers proved to be the difference in losing the second consecutive region contest by two points.

And with No. 2 North Oconee (5-0, 3-0) still on its schedule, the Bears can not afford any more region losses, if they want to control their own destiny for the playoffs.