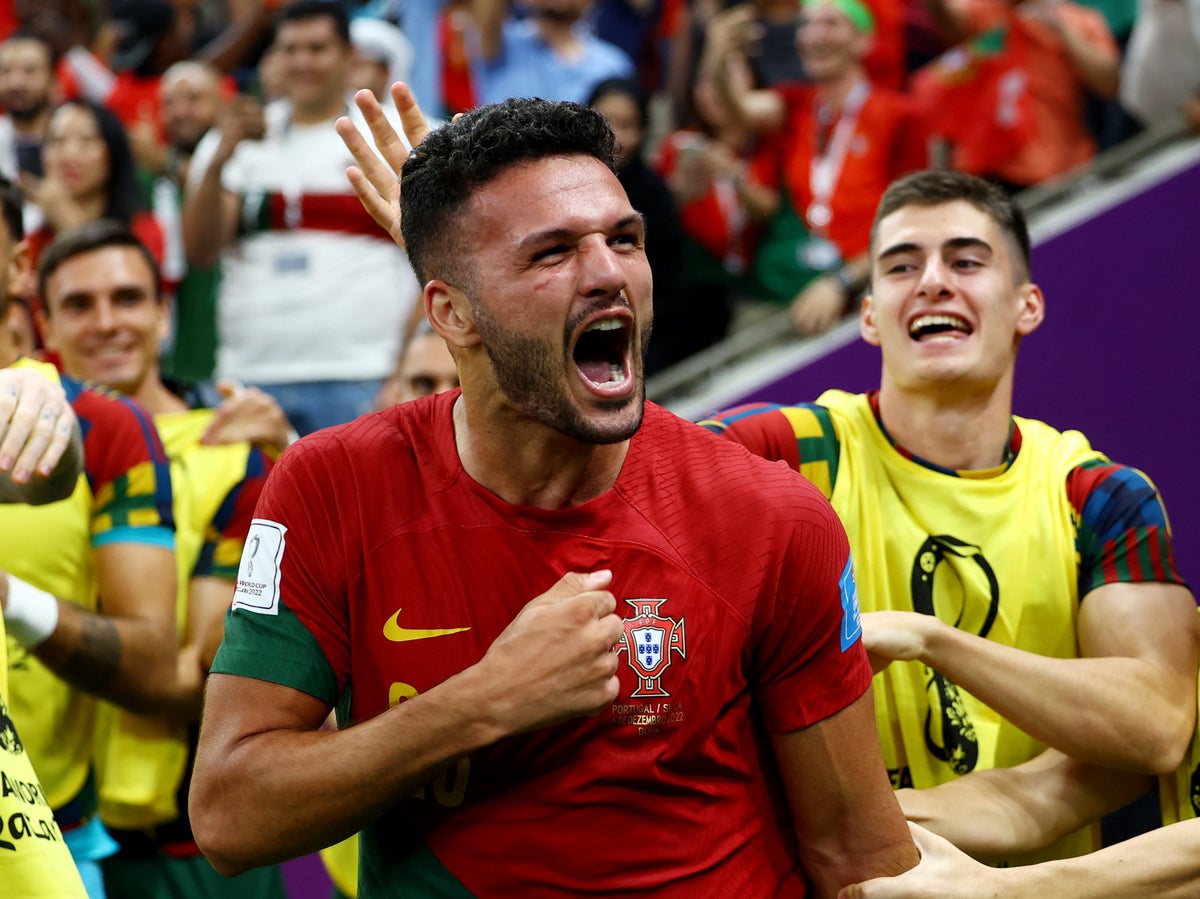 Prior to Portugal’s World Cup last-16 match against Switzerland, Cristiano Ronaldo had played 13,250 minutes of international football, approximately nine days more than the 36 minutes played by Goncalo Ramos. Ronaldo had also scored 109 goals in 159 international matches, including at five World Cups, while Ramos had scored once in three substitute appearances.

But by the end of his first start for his country, as Portugal cruised into the quarter-finals of the World Cup with a thumping 6-1 win over Switzerland, Ramos had scored three more goals in the knockout stages of the tournament than Ronaldo has managed across his entire career. The 21-year-old’s sensational hat-trick will go down as one of great breakout displays in World Cup history.

The decision made by Portugal head coach Fernardo Santos to drop Ronaldo was a seismic one. Whether it was due to form or for disciplinary reasons, following the reaction to his substitution against South Korea, it was a decision that required every inch of a strong and experienced managerial backbone. That much was proved by the army of photographers camped outside the Portugal dugout, and as Santos ignored the screaming hordes and their shrieks when Ronaldo was shown on the big screen.

But the reason the decision was bold was two-fold. Santos did not just drop Ronaldo – he did so for a striker who scored just seven times in his first full season in the Portuguese top flight last year. It was not for Rafael Leao, the star of AC Milan’s Serie A winning team who proved his class with a sublime curling effort late on, or Ricardo Horta, who scored after starting against South Korea in the group stages. Instead, it was for a player who had seen the fewest minutes out of all of Portugal’s 26-man squad, apart from the two substitute goalkeepers Jose Sa and Rui Patricio.

Not that you could tell when, 18 minutes into the match, Ramos turned inside the Switzerland penalty area, strode forward as Fabian Schar backed off, and arrowed an unstoppable shot in the top corner. Or, in the second half, when Ramos made the run to the near post and poked an instinctive finish through Yann Sommer’s legs. Or, as the world was still learning his name, when Ramos dinked a delightful finish over Sommer to become the first player since Miroslav Klose in 2002 to score a hat-trick on his first World Cup start.

And as first World Cup starts go, this was beyond what Ramos would have dreamed of when he went to sleep on Monday night, assuming Santos had disclosed the news that he was planning to drop his captain. But one’s loss is another’s gain and suddenly Ramos will be starting in a World Cup quarter-final after making the most of his surprise opportunity. Certainly, overall Portugal were far better without Ronaldo in their line-up.

Santos could change his mind again, and if the veteran Portugal manager was tired of answering questions about Ronaldo before then he will have to prepare himself for the storm that will come his way, but Ramos has also done him a huge favour by repaying his faith. Ramos has already answered those questions for him.

As have Portugal. Bruno Fernandes, Joao Felix, Bernardo Silva were exceptional but in Ramos they have not only a vibrant and willing runner, but a striker who is running off  fearlessness, youthfulness, and exuberance – qualities that the 37-year-old Ronaldo has left behind. It was displayed most clearly in his opening goal, which was the very definition of an unstoppable shot. Schar was allowing Ramos to strike, and to even attempt it was impudent. It was, perhaps, the sort of shot Ronaldo made a career out of.

There were 18 years between Portugal’s first two goalscorers, as the 39-year-old Pepe rose highest to double Portugal’s lead in the first half. With it, the veteran provided a stern defence of the values of experience after Ronaldo’s absence saw with it the loss of 159 caps.

Pepe had not yet made his international debut when Portugal last won a World Cup knockout match – when they reached the semi-finals in Germany in 2006.  He is set to feature in their first World Cup quarter-final in 16 years when they take on Morocco but Ronaldo, the sole survivor of their 2006 squad, likely won’t be. For that, Ramos is now as responsible as Ronaldo, but it’s a decision that even Ronaldo can’t argue with now.