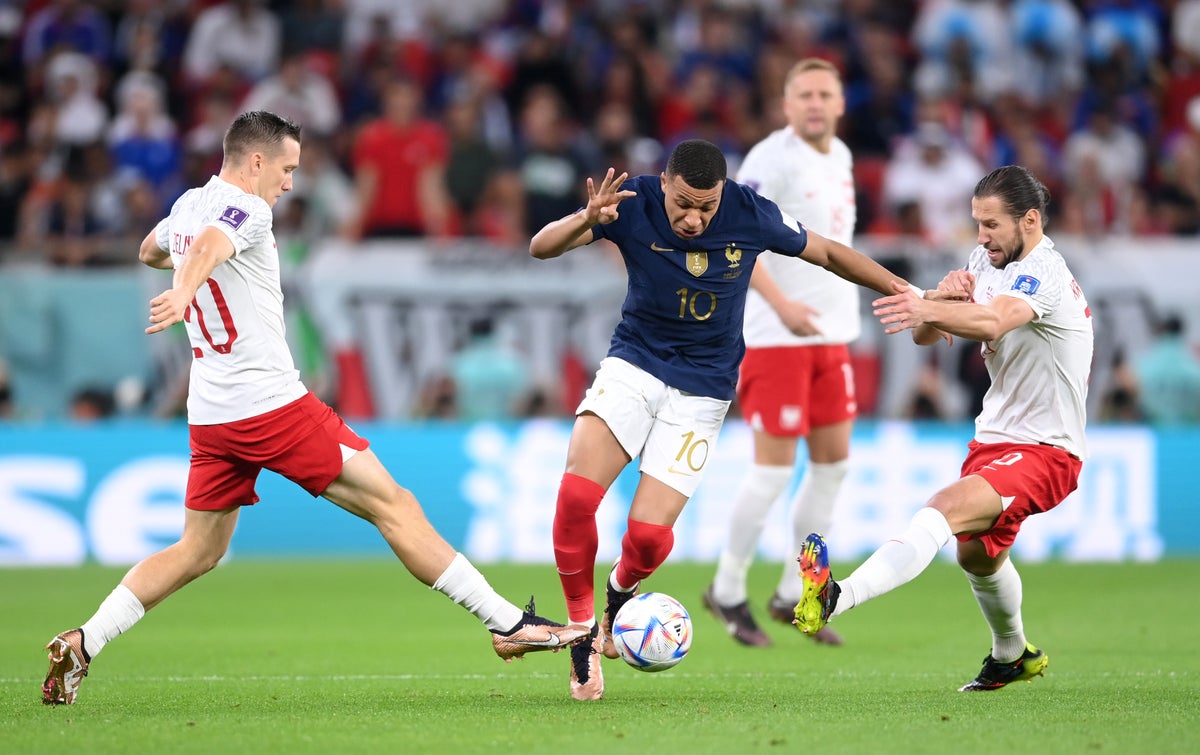 France were relentless on the attack as they pushed for an opening goal but could not unlock a sturdy Poland until just before the break when Mbappe played a pin-point ball through to Giroud, who hammered it past a diving Wojciech Szczesny to claim his 52nd goal for Les Bleus.

Holders France continued to press after the break and Mbappe did not miss in the 74th minute, unleashing a missile from just inside the penalty area that shot into the top corner. Mbappe was not done, adding a second goal in stoppage time with another screamer to seal the win and take his total for the tournament to five before Poland got a consolation goal from a Robert Lewandowski penalty.

Relive all the action with our live blog below:

World Cup Round of 16: France vs Poland

Kylian Mbappe looks unstoppable, but Poland have shown where France can be beaten

If France can go on to win the World Cup in Qatar they will make history by becoming the first reigning champion to defend their title in 60 years. Naturally, then, their title defence has in many ways come to mirror their 2018 campaign in Russia. They have gone back to the tried and trusted under Didier Deschamps: the exceptional Kylian Mbappe has renewed his partnership with Olivier Giroud, except this time both are scoring. Antoine Griezmann has been reborn, with his influence resonating around the side.

There is a key difference, however. While their performances in the group stages were more electric in Qatar than they ever were in Russia, perhaps this display in the 3-1 win over Poland was, on paper at least, a return to the safer approaches of four years ago. The opportunities Poland were able to create in an awkward first half, though, showed that there is not the same stability within the side – particularly without the presence of Paul Pogba and N’Golo Kante in midfield. It is now the axis of Aurelien Tchouameni and Adrien Rabiot that allows Griezmann to roam forward and find space, setting up chances for Mbappe and Ousmane Dembele to attack on the wings.

But what Poland were able to do in the first half of this knockout match should create some encouragement for other World Cup contenders. Before Giroud’s opening goal, there was a 15-minute spell where Poland controlled possession and the midfield. Poland had been accused of “anti-football” as they surrendered any desire to have the ball in the 2-0 defeat to Argentina, a result that was still enough for them to qualify from the group stage. There was more ambition here, as Poland deployed a five-man midfield and committed runners forward to support Robert Lewandowski.

The next World Cup last-16 fixture sees England take on Senegal with the winner going on to play France in the quarter-finals. Follow all the build-up for that game right here:

It was a day to celebrate a record-breaking No. 9. Just not Robert Lewandowski. Now at Barcelona, Poland’s highest scorer, a serial marksman in the Bundesliga, standing second only to Gerd Muller in the history of the German top flight and Bayern Munich alike, bowed out of the World Cup, perhaps forever, by doubling his tally at his level.

Yet, and perhaps for once, he paled by comparison with Olivier Giroud. In a sense, everyone who has ever played for France does, too. Even as Kylian Mbappe, who delivered a third display of breathtaking brilliance this World Cup 2022, outscored Giroud at the Al Thumama, he trails him on the all-time leaderboard. Even as Mbappe took his tally to five goals this World Cup, it was not the most notable statistic. Such is Giroud’s historic feat.

An often underrated figure has now headed into uncharted territory for Les Bleus. In celebration of his opener, Giroud raised five fingers on one hand, two on the other. He has a 52nd international goal.

Only Portugal’s Cristiano Ronaldo (118) and Hungary’s Ferenc Puskas (84) have netted as many international goals as Poland’s Robert Lewandowski (78) for a European nation.

Lewandowski’s goal took him above Pele’s 77 to put him ninth in the all-time leading men’s international goalscorers.

Who will France play in the quarter-finals?

France secured their spot in the last eight with a comprehensive win over Poland and now face a wait to see who they will take on in the next round.

Their possible opponents are England or Senegal who face each other in a last-16 clash tonight with kick off at 7pm. Can Gareth Southgate lead his team through another knockout game to set up a clash with the World Champions?

With five goals and two assists, Kylian Mbappe has been directly involved in each of France’s last seven goals at the World Cup. Is there any team at this tournament that can stop him for either scoring or assisting goals for France?

Only 13 players have ever scored more World Cup goals than Kylian Mbappe’s nine in 11 games.

Kylian Mbappé has scored five goals in four games at the 2022 World Cup already surpassing his goal tally from his previous appearance in the tournament in 2018 (four goals in seven games).

Kylian Mbappe’s magnificent performance inspired France to a 3-1 win over Poland as the holders advanced to the World Cup quarter-finals where England or Senegal await.

It was a positive start from Didier Deschamps’ men with Aurélien Tchouameni stinging the fingertips of Wojciech Szczesny, while Mbappe and Ousmane Dembele tormented the Polish full-backs with their pace and trickery. But Poland opened up the champions down the left through Bartosz Bereszyński, but two misses from Piotr Zielinski and another from Jakub Kaminski, thanks to Raphael Varane’s goalline clearance, kept the score level.

And Poland were soon punished as Kamil Glik and Jakub Kiwior made a mess of their line. Mbappe slipped in Giroud to break the deadlock with angled finish low past Szczesny. Poland plugged away and admirably stayed in the contest, until Giroud’s delicate touch from a high clearance, sparking a devastating counter-attack which was finished off by Mbappe’s thumping finish at the near post from the edge of the area. Dayot Upamecano’s handball was harshly penalised for a late penalty, with Robert Lewandowski’s retaken spot kick earned a consolation.

Here are the player ratings from the Al Thumama Stadium: