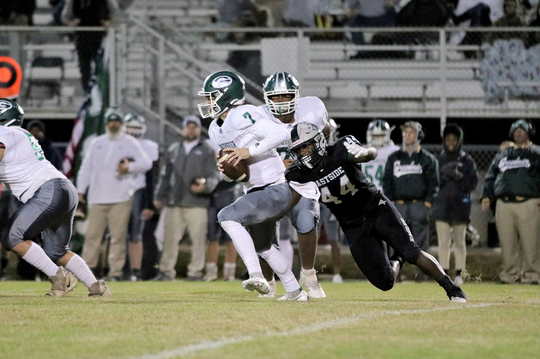 Coming off a strong 2021 campaign, in which they advanced to the Sweet 16, the Eastside Eagles have their eyes set on another postseason push.

In just his first year as head coach, Jay Cawthon led the Eagles to an 8-4 record while going 5-2 in the region. Eastside received huge assists from a strong run game and defense that caused problems and mismatches for many teams last season.

As it looks to repeat 2021’s success, the new year has brought along many changes for Eastside, starting with its move into a new building.

The move allowed for Cawthon and the rest of the football program to get upgrades to their training facilities in preparation for the season.

“It is a bigger space to help with the volume of kids that we have. We have easy access to a field across the street for us to do our agility [work],” Cawthon said.

One of the biggest departures for the Eagles was star running back Dallas Johnson who set the school rushing record during his final season after running for 1,809 yards and 22 touchdowns in 2021.

As Cawthon looks ahead with a new cast of playmakers, he says he’s sticking with the game plan that has allowed the Eagles’ offense to be successful for many years.

“We are going to be a running back by committee like we always have been,” Cawthon said. “I feel good about our running backs. We have three or four guys who can go. We have Kenai [Grier] back. We have Jayden Barr who is a sophomore who started as a safety as a freshman. [Barr] was able to get touches last year. [We have] DJ Henderson who transferred from Newton, and he has fit in quite well.”

Despite the loss of one of the best running backs in program history, there are still many options left on the table for the Eagles going into the next couple years.

Quarterback E’Sean Arnold will be at the offense’s controls. Arnold took over as the starting quarterback in the middle of the 2021 season and never turned back. Arnold threw for 680 yards and five touchdowns while completing 61% of his passes. He also tacked on 299 rushing yards and two scores on the ground while averaging eight yards per carry and tallied 27 tackles and three pass breakups as a defensive back.

“One thing I noticed [from E’Sean] even in the spring practices was the maturity and confidence,” Cawthon said. “He knows he is the guy. He is the guy on defense too. He does not come off the field. He leads by example and our kids play hard for him.”

As Arnold has had the chance to gain more reps within the offense, Cawthon is looking to expand the playbook to see what the offense is capable of on the ground as well as in the pass game.

“I think we will be able to open it up more from a passing standpoint,” Cawthon said. “Last year we had Dallas back there and we were really good up front. As the season went on, we did open [the playbook] up more. I think we are going to be able to throw it around more.”

“Our big thing is that we lost four offensive linemen, so that is the big focal point for us,” Cawthon said. “We will get better as we go along. They have been working, I feel good about our skill [position players].”

As most of the defensive players for the Eagles are set to return for the new season, they did lose one of their top defensive linemen in Jalen Farmer, who signed with the University of Florida after his senior season.

“We got nine starters back [on the defense], they all have a lot of playing time. Jean Claude Joseph III does a heck of a job for us,” Cawthon said. “We do not have one real leader; we have a group who plays hard and knows how to practice. We love our guys because they know how to practice, and they want to get better.”

The Eagles are once again in Region 8-AAAAA, but they will see some new faces as they will have unfamiliar matchups, particularly on its non-region slate, against Luella, Ola, Flowery Branch and Jefferson.

Going into his second year, Cawthon has high aspirations for a team he feels has a legitimate shot at making a deep playoff run.

“I feel like I am more confident, just like the players,” Cawthon said. “I am learning every day. Luckily, I have a great staff that helps me out. Our main thing is building these relationships with the kids.”