A proxy fight at the energy supermajor ExxonMobil is set to reach a climax on Wednesday, when shareholders cast votes on company leadership and strategy that will also be a verdict on the future of the oil industry.

The balloting follows months of pressure from Engine No 1, an upstart activist hedge fund that wants the biggest US oil producer to cut capital spending and find a new plan it has said would focus “on accelerating rather than deferring the energy transition” to cleaner energy.

The hedge fund launched its activist campaign in December, nominating four new individuals for election to the company’s board of directors.

“This could be a landmark moment for the investment and oil industries alike,” said Edward Mason, director of engagement at Generation Investment Management. “If Engine No 1 candidates are elected, responsible investment will truly have shown its muscle and the import of investor net zero commitments will be clear.”

The proxy battle has been expensive, with Exxon saying it would spend at least $35m on shareholder solicitations and Engine No 1 expecting $30m. The company has even contacted some small shareholders in a bid for support.

Crucial to the outcome will be the votes of Exxon’s largest investors: the fund managers Vanguard, BlackRock and State Street, which hold more than a fifth of the company’s shares altogether.

The pension systems Calpers, Calstrs and the New York State Common Retirement Fund as well as the European asset manager Legal & General Investment Management have said they will vote for the Engine No 1 slate on Wednesday. America’s two largest proxy advisers this month endorsed some of the hedge fund’s board nominees. 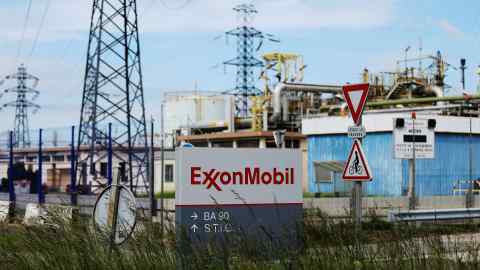 Engine No 1 itself holds a stake worth just $54m in a $247bn company that less than a decade ago was the world’s largest by market capitalisation.

Years of heavy spending and mounting debts have disillusioned some Exxon shareholders, although the company preserved its dividend last year despite losing more than $20bn as the pandemic and collapsing oil prices ravaged its business.

Engine No 1 says Exxon’s focus on oil and gas exposes it to “existential” risk as competitors prepare for a lower-carbon world.

“This might be the most important shareholder vote in Exxon’s history,” said Paul Sankey, oil analyst at Sankey Research.

Darren Woods, chief executive, has ruled out a hard pivot to clean energy and told the Financial Times last week that Exxon would “address a lower-carbon future and the challenges associated with that” while also “providing the products that society needs”.

Energy is the world’s indispensable business and Energy Source is its newsletter. Every Tuesday and Thursday, direct to your inbox, Energy Source brings you essential news, forward-thinking analysis and insider intelligence. Sign up here.

How To Hit The Ground Running With Your Independent Consultancy

How KTrade Plans To Drive A Boom In Pakistani Share Trading