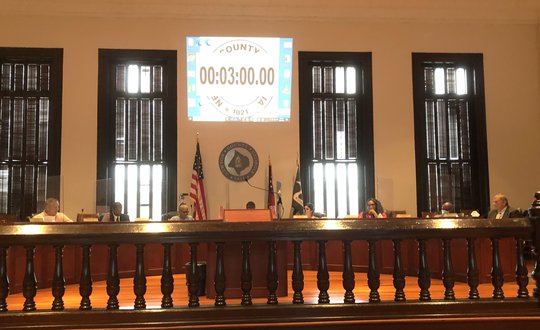 COVINGTON, Ga. — County commissioners will wait to determine if they want to object to the city of Covington’s planned annexation of land for planned construction of a massive warehouse project.

The Newton County Board of Commissioners Tuesday, Aug. 2, voted to table — delay action on — consideration of an objection that state law allows them to make to the city of Covington’s annexation of 55.8 acres at the intersection of Flat Rock and Gregory roads.

A rezoning of the land from Agricultural to Heavy Industrial will be requested following an annexation to allow planned construction of about 4 million square feet of warehouse and e-commerce space.
Commissioners said they needed more information about the effect of Heavy Industrial zoning and development on the area designated in

Opponents, including Commissioner Stan Edwards, said they believe the site is close enough to the county’s main drinking water source, Lake Varner, that any construction would affect the lake water.

County attorney Patrick Jaugstetter told the board the county could make the case that the zoning change was extreme enough that it wanted to object to it.
He said objections also could be raised about the development increasing the demands on the county’s infrastructure — the lake — and the zoning differing substantially from the county’s Future Land Use Map for the area.

If the county formally objects, the process would include the state government appointing arbitrators to determine the final zoning for the area, Jaugstetter said.

The board voted to delay action until its Aug. 16 meeting.

In other action at the Tuesday night meeting, commissioners:

• Approved a construction contract with Wright Brothers Inc. for a replacement bridge on Brown Bridge Road over the Yellow River.

Cost is $8.1 million with the county providing 20% of the cost from the 2017 SPLOST.
• Approved a contract with GDOT to oversee construction funding of the replacement bridge on Brown Bridge Road over the Yellow River. The cost will be a $20,000 fee to GDOT for management of the funding plus 20% of the construction cost. Funding is from the 2017 SPLOST.

• Approved contracts with GDOT to oversee construction funding for Brown Bridge Road at Snapping Shoals Creek realignment and bridge replacement project. The cost will be a $20,000 fee to GDOT for management of the funding plus 20% of the construction cost. Funding is from the 2017 SPLOST.

• Approved a contract with CMES Inc. for Brown Bridge Road at Snapping Shoals Creek realignment and bridge replacement project.
Cost is $4.9 million and 20% of the cost will come from the 2017 SPLOST.

• Approved purchase of land for right-of-way and easements for improvements to the intersection of Crowell Road and Harold Dobbs Road. Cost is $135,370 with funding from the 2017 SPLOST.

• Approved Ross Associates for up to $62,350 for a review of the Impact Fee program to determine if the county is collecting the amounts officials believe it should. The program helps provide funding for infrastructure and other needs associated with residential and commercial growth.

• Approved Eaves Consulting Services for $15,000 to begin negotiations with the county’s cities over the sharing of LOST (Local Option Sales Tax) proceeds. LOST is a 1% sales tax that can only be used to offset the need for property tax revenues.

• Approved giving the chairman permission to execute a Neighborhood Stabilization Program Closeout Certification Form that would stop future payouts of funds from the 14-year-old program.

• Approved Matrix Engineering for construction materials testing for the planned second phase of the Denny Dobbs Skate Park at a cost of $8,410 from the 2017 SPLOST.

• Appointed Al Miller to the District 5 position on the DFACS Board;

FOOTBALL PREVIEW: Eagles set sights on another postseason berth in 2022

FOOTBALL PREVIEW: Rams poised to bounce back in 2022