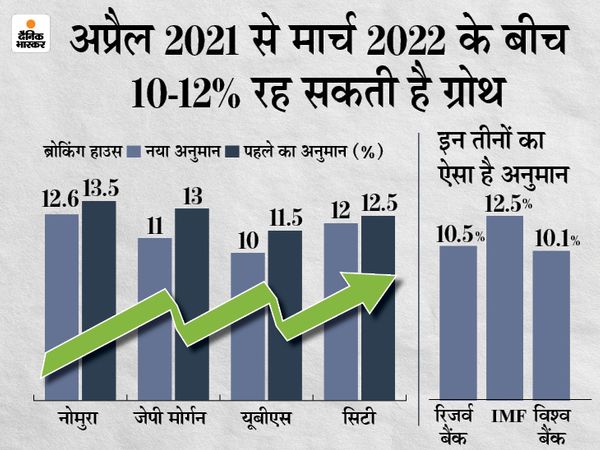 Goldman said the growth rate will be 11.1%

GDP is already falling from Corona

Lockdown is on the rise

The incidence of frequent lockdowns of cities in the country is increasing. At the same time, the effect of corona is also happening rapidly. India is among the worst in the world in new cases. Nearly 3.5 lakh new cases are coming to Corona every day. While 2.25 lakh deaths have been done. Though the Modi government is avoiding nationwide lockdown so far, Corona’s team has advocated a complete lockdown.

Several states and cities in the country including Mumbai, Delhi, Bihar are already in lockdown. States such as Uttar Pradesh, Maharashtra and Karnataka account for 20% of the total active cases of corona. However till a few weeks ago it was up to 60%. Goldman Sachs said that although the lockdown this year is still light compared to last year. Its effect is not as much as it was the last time.

Goldman said medical infrastructure is still under pressure in many large cities. Because there is a shortage of medical oxygen, blood plasma, medicines and beds in hospitals.

Corona may increase further in mid-May

The government’s medical panel has estimated that by the middle of May the country may have 5 lakh corona cases a day. Talking about the vaccine, about 13% of the population in the country has got the first dose vaccine. Whereas 2.73 crore people have also got second dose. Till two weeks ago, 33 lakh people used to get the vaccine daily, which has now come down to 23 lakh. This is because the production of the vaccine is getting delayed due to lack of raw materials.

A total of 75 lakh people have been unemployed in the country in April. According to CMIE data, employment has been badly affected in April and something similar may also be seen in May. Cases of new employment are also declining. Goldman Sachs said that most of the indicators are saying that the effect of this lockdown and corona will be seen on the country’s GDP.

The lockdown has resulted in a decline in e-way bills, mobility, rail fares and cargo traffic. This will have a direct impact on the country’s growth rate. However, activity is expected to return in the July-September quarter.