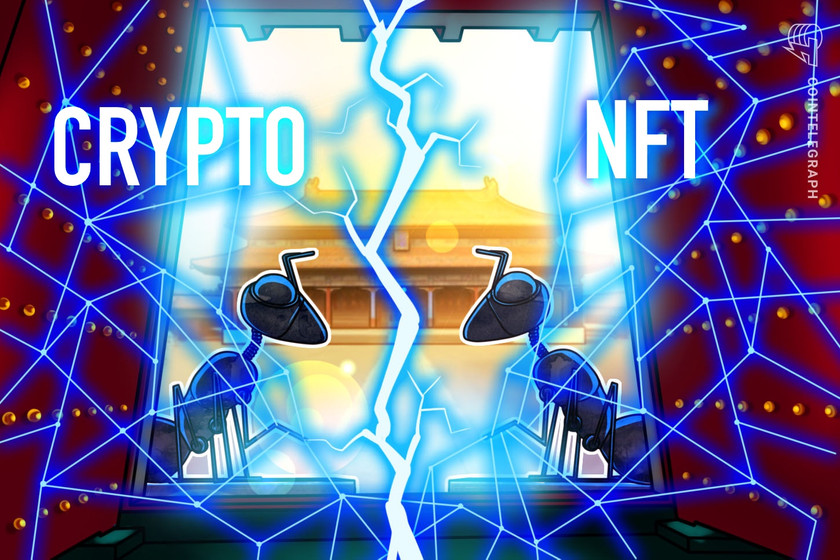 China is planning to draw a clear line between cryptocurrencies and nonfungible tokens (NFT) — pretty much the same way it did with its digital currency efforts — before the crypto crackdown in the country harms the local NFT industry.

The Blockchain-based Service Network (BSN), a government-backed blockchain project in China, is working on infrastructure that would support businesses and individuals to build platforms and apps to manage NFTs, the South China Morning Post reported.

Officially called the BSN-Distributed Digital Certificate (BSN-DDC), the project aims to support the deployment of non-crypto NFTs by offering application programming interfaces for the development of user portals and apps where fiat money would be the sole payment method.

Underscoring that NFTs have no legal trouble in China as long as they are not used with Bitcoin (BTC) or other cryptocurrencies, Yifan He, CEO of BSN’s tech support provider Red Date Technology, said that the upcoming infrastructure would use an open, permissioned blockchain to enable an on-chain governing body.

“Public chains can’t be legally operated within China,” he told Cointelegraph, adding that a credible, low-cost infrastructure is desperately needed to host all NFTs in China. Without a dedicated, nationwide NFT infrastructure, NFTs can only be deployed on “unreliable” private chains in the country, the executive added.

By enabling a centralized entity to govern the infrastructure and intervene in the event of illegal activity, Red Date plans to create a compliant NFT platform that is fully separated from the regular profile of crypto.

He noted that Red Date is working with all DDC project partners to make the network as transparent as possible while staying compliant with Chinese regulations and laws. All the gas fees on the BSN-DDC network are paid with fiat money.

“We will provide services to NFT companies in Hong Kong, which means if there is any international business involving issuing NFTs inside China, they definitely can choose to use the BSN-DDC network via our Hong Kong gateway.”