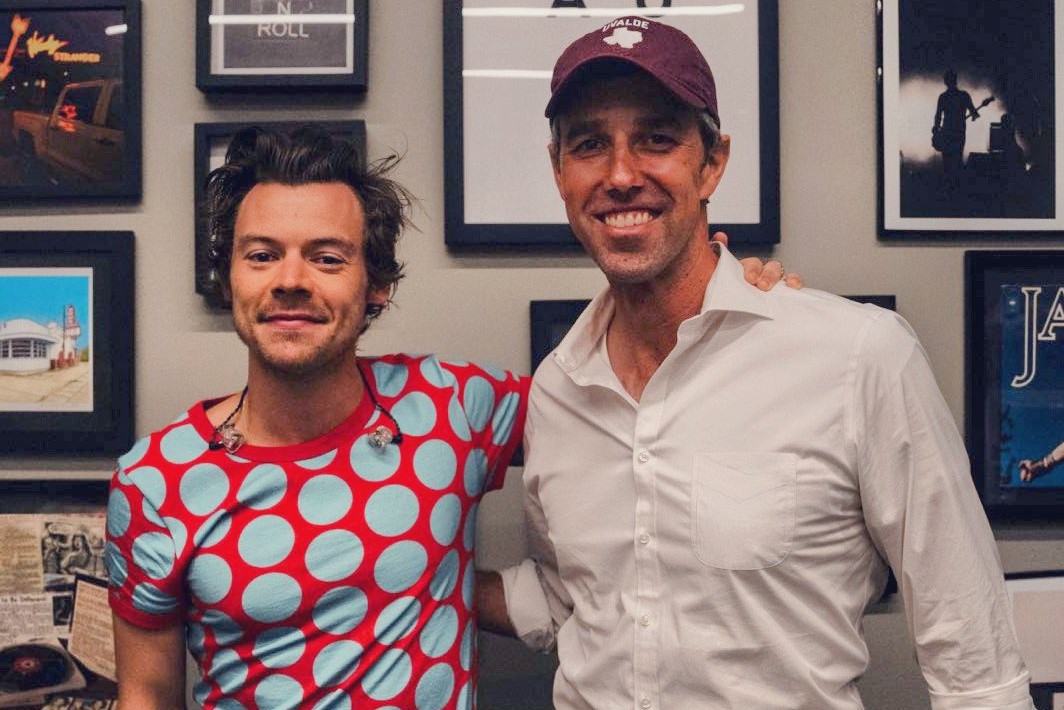 More and more celebrities are starting to show their support for Beto O’Rourke ahead of the Texas gubernatorial election on November 8. O’Rourke is the Democratic challenger facing Republican incumbent Greg Abbott, who’s served in his role as Texas governor since 2015.

In 2018, many famous names backed O’Rourke when he tried to win the U.S. Senate race in Texas against Ted Cruz. Remember when Grammy-winning singer and Texan Beyoncé sported an O’Rourke hat on her Instagram a week ahead of the election? We do.

Now, in 2022, O’Rourke continues to round up big voices on his side. Here’s who has shown their support:

British pop singer Harry Styles endorsed O’Rourke for Texas governor during his concert at the Moody Center in Austin on Sunday, October 2, according to fans from the show. Twitter user HSD Love On Tour tweeted that Styles flashed a “Beto for Texas” sticker on his guitar.

The “As It Was” singer has been vocal about his opinions on Texas politics and laws while in Austin for his six-night residence at the Moody Center, dubbed “Harry’s House.” Near the end of his sold-out show on September 26, he echoed a mantra that spilled from his mouth just the night before: “No one can tell you what to do with your own body,” he said, pointing to the nosebleeds. “It is yours.” Ecstasy doesn’t begin to describe the response that Styles’ vague but powerful words elicited.

Actor Mark Ruffalo, who’s best known for playing The Hulk in The Avengers films, tweeted that he’s right behind Styles when it comes to endorsing O’Rourke. He tweeted, “Take a friend to the polls, you all!”

This isn’t the first time Ruffalo has been vocal about Texas politics. In May, he also urged Texas to go out and vote for progressive candidate Jessica Cisneros, who was hoping to unseat incumbent Rep. Henry Cuellar in District 28. However, she did not win the race.

Willie Nelson endorsed O’Rourke during the “Vote ‘Em Out” campaign rally in Austin on Sunday, October 2. Nelson has a history of political endorsements, including one for O’Rourke back in 2018.

Guests paid either $5,000 or $10,000 for tickets to the event, which the invitation obtained by Quorum Report indicates O’Rourke attended in person.

In 2018, Parker was also photographed sporting an O’Rourke campaign button at a film festival in New York.