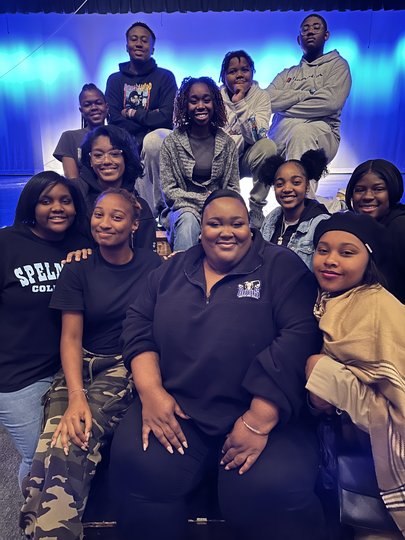 COVINGTON, Ga. — It was hard for Samia Jones and the other members of Newton High’s one-act play team to hold their excitement.

The all-girl team of five actresses, along with coach and Newton’s theatre instructor Amita Lee, sat with baited breath as judges began calling off the names of schools and where they placed during the Region 4-AAAAAAA championships last month.

The anxiety reached fever pitch levels after the second place school was named because the group from Newton knew this was their last chance to hear their name called. At this point, it was either all or nothing.

“They were handing out awards and calling where everybody placed, and I was just so anxious and nervous, but I was also happy all at once,” Jones said. “It was almost as if time stopped when they called their show and turned to us.”

A Song for Coretta was the show’s title — a story that focused on five Black women, all representing different ages and generations, who came to pay respect to Coretta Scott King, the late wife of slain civil rights activist Dr. Martin Luther King, Jr.

Though the one-act play team is considered a Georgia High School Association activity — just as football, basketball or any sport — and though the team is grouped into the same region alignment as the school’s sports teams, competition in one-act play world looks very different.

“It’s not like sports where you compete multiple times against those teams in your region throughout the course of a season,” said Lee who’s in her fourth year teaching and coaching at Newton. “We have one formal competition, and that’s the region championship. There’s only one. And it’s pretty much all or nothing. If you win, you go to state. If you don’t finish first at region, you’re pretty much done.”

“Last year, it was my first time going to the competition, and it was just crushing to go and not win because that’s everybody’s ultimate goal,” Jackson said. “That kind of lit a fire in me to really push myself as an actress to go out and win it the next year.”

That explains why, when Newton’s name was called as Region champs, it was Jackson, a sophomore, who sprinted toward the stage to claim the trophy. Jones wasn’t far behind.

“All I can say is, there was a video — I don’t remember who recorded it — but all you could see was my hair running behind Alainah to meet her on stage,” Jones said. “I was up on that stage. I was holding her. The lights were hitting me, and everybody was crying because it was a lot for me to take in at the moment.”

One member of the team wasn’t as surprised at the victory. Senior Mariah Beattie, winner of the Region Actor of the Year award, said she was thrilled but not at all shocked.

“When we won first place, I wasn’t really smiling all like that because I knew we were gonna get first place,” Beattie said. “I knew we had put in the work to make it happen.”

Even Lee, who had once thought winning a region title was nothing more than a pipe dream, seemed to have a different feeling about this one.

“It’s not often that you get such a dedicated group,” Less said. “Sometimes when we’re practicing and running lines, I’m like, ‘they’re not gonna be ready. We might as well just back out.’ But they were constantly surprising me. The night before we went to region, when they did the show, I’m watching it be this flowing, magical thing with the audience. And it just made me think of all the work we put in to win.

“I knew they had the potential, and I know we were all drained and tired, but that night, they brought it. It made all the time and effort worth while.”

The win punched Newton’s ticket to state championship competition last weekend at Jackson County High School in Jefferson. There, the Rams competed against stalwart programs such as Lambert which won state for the third time in the last five years. But the experience was still a reward for the investment.

One-act play involves the skill of taking a full show and cutting it down to a 55-minute performance. Each team must execute everything from stage setup, the actually show itself and then the take-down process without going over that 55-minute timeframe.

“If you’re over by just one second, you’re disqualified,” Lee said.

Her Rams selected “A Song for Coretta” after failing to find the right cast fit for their originally planned performance.

“I came into this year wanting to do Steel Magnolias,” Lee said. “I just knew that was it. But when we couldn’t cast it because we couldn’t find enough girls that could do it, it kind of sent us scrambling.”

Lee stumbled upon A Song for Coretta for the first time, and felt like it was the perfect fit for the makeup of her team.

“I’m so thankful it was the one we did, because of what it is,” she said. “We’re a majority African American school, and one of my goals is to help our team see themselves in the stuff they do. That’s why this was so perfect.”

Both Jones and Jackson found significant personal meaning in the play, both for the reasons Lee mentioned, and other reasons more germane to their individual circumstances.

“I was so happy to win as a team, but in the process, I also felt like I proved something to myself,” Jones said. “When I was little, I never wanted to tell anybody that acting and the arts was what I wanted to do with my life. When someone asked me what I wanted to do when I grow up, I gave the generic answers of being a doctor or a dentist because it never occurred to me that I could have pride to admit that I want a career in the fine arts. So when we won, it was like healing a part of my inner child.”

For Jackson, her character, Mona Lisa, depicted a woman struggling to find footing as a Hurricane Katrina survivor. That hit home to her specifically.

Both Jones and Jackson felt particular satisfaction about being able to tell a story through drama that depicted something near and dear to their heritage, but also showing their peers that success in the arts can happen for them.

“Being a Black woman, it’s hard because you feel like you’re very overshadowed,” Jones said. “It’s hard to break into work like this. It’s complicated and a lot goes into it, but when I got into it and saw other people like me with these similar interests, it gave me energy and made me thing, ‘Wow. We can do this together.”

Said Jackson: “To do this, especially as a predominantly African American School, for them to see a powerful play about a powerful Black woman and other Black women who shared struggles with each other, I think it just says so much to so many people.”

For Lee, it says specifically that hard work pays off. Preparation for region competition begins right when school starts in August. From then through the end of October, Lee usually gets to Newton before 8 a.m. for eight hours of teaching, and then doesn’t leave until 10 p.m. most nights.

To a person, each member of the team describes the work as a sacrifice. So much so that Beattie almost didn’t agree to participate this year.

“When I came to school in August, I said I didn’t want to do this show by any means,” she said. “I came in last year, we did the show. It was a hustle-and-a-half. I said I was going to be chillin’ my senior year. No stress. I’m not doing it. But you see where we are now.”

It became so serious for Beattie that she even got her 9-year old brother Michael involved.

“He comes in and runs lines with us and just does anything to help,” Lee said. “He’s our biggest fan.”

“I think this is something I might like to do when I get to high school,” Michael said.

And that, perhaps, is a big reason why Beattie, nor her team has any regrets. In fact, this year’s performance bolstered a sense of county-wide pride for the arts, as Jackson celebrated the fact that Alcovy High’s one-act play team also won the champion in Region 3-AAAAAA, punching its ticket to the Class AAAAAA finals.

She’s hoping that the recent success will encourage more people to see the success that can be had for high school students in the arts.

“We come from a county that appreciates arts, but we also come from a very sports driven county,” Jackson said. “So for two schools from this county to be able to achieve on such a high level in the same year, it just shows a lot. For us, I think it shows that this department means something for us.

“We want to make a name for it. We want to see this grow for us, for our school and our county as a whole. We want to put ourselves in the same running and level of importance as sports.”